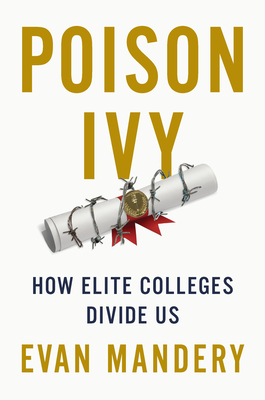 
On Our Shelves Now at:
An eye-opening look at how America's elite colleges and suburbs help keep the rich rich--making it harder than ever to fight the inequality dividing us today

The front-page news and the trials that followed Operation Varsity Blues were just the tip of the iceberg. Poison Ivy tells the bigger, seedier story of how elite colleges create paths to admission available only to the wealthy, despite rhetoric to the contrary. Evan Mandery reveals how tacit agreements between exclusive "Ivy-plus" schools and white affluent suburbs create widespread de facto segregation. And as a college degree continues to be the surest route to upward mobility, the inequality bred in our broken higher education system is now a principal driver of skyrocketing income inequality everywhere.

Mandery--a professor at a public college that serves low- and middle-income students--contrasts the lip service paid to "opportunity" by so many elite colleges and universities with schools that actually walk the walk. Weaving in shocking data and captivating interviews with students and administrators alike, Poison Ivy also synthesizes fascinating insider information on everything from how students are evaluated, unfair tax breaks, and questionable fundraising practices to suburban rituals, testing, tutoring, tuition schemes, and more. This bold, provocative indictment of America's elite colleges shows us what's at stake in a faulty system--and what will be possible if we muster the collective will to transform it.

An Emmy and Peabody Award winner, Evan Mandery is a professor at the City University of New York. He has written for the New York Times and Politico and has appeared on The Today Show, CNN, and NPR's Fresh Air. His journey as a Harvard alum publicly challenging legacy admissions at elite schools led him to write Poison Ivy: How Elite Colleges Divide Us (The New Press). He lives in Montclair, New Jersey.