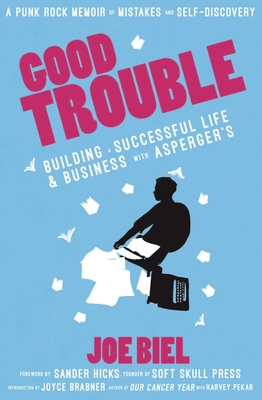 
Special Order—Subject to Availability
In 1996, everything about Joe Biel's life seemed like a mistake. He was 18, he lived in Cleveland, he got drunk every day, and he had mystery health problems and weird social tics. All his friends' lives were as bad or worse. To escape a nihilistic, apocalyptic worldview and to bring reading and documentation into a communal punk scene, he started assembling zines and bringing them in milk crates to underground punk shows. Eventually this became Microcosm Publishing. But Biel's head for math was stronger than his ability to relate to people, and it wasn't until he was diagnosed with Asperger's Syndrome that it all began to fall into place. This is the story of how, over 20 years, one person turned a litany of continuing mistakes and seeming wrong turns into a happy, fulfilled life and a thriving publishing business that defies all odds.
Joe Biel is a writer, activist, filmmaker, teacher, and founder of Microcosm Publishing and co-founder of the Portland Zine Symposium. He shows his films on tour with the Dinner and Bikes program. He has been featured in the Time Magazine, Publisher's Weekly, and Utne Reader. He lives in Portland, OR. Sander Hicks (Introduction) lives in New York City. He founded Soft Skull Press, winner of the Outstanding Publisher of the Year award for the publication of controversial George W. Bush biography Fortunate Son. Joyce Brabner (Foreword) lives in Cleveland, where she is a social activist and writer of political cartoons. She co-wrote Our Cancer Year with her late husband Harvey Pekar, and is most recently the author of Second Avenue Caper.