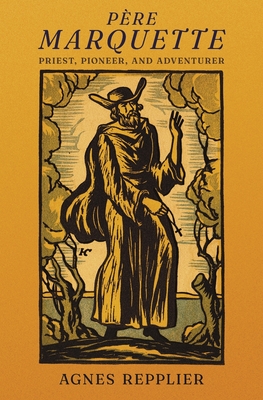 The early French colonies in North America were a harsh and inhospitable place. Visitors to these settlements often remarked that these early colonialists, when compared with their European relations, seemed forged of a different metal: bold and brash, like the environment surrounding them. Yet, among such daring figures, a certain unassuming Jesuit missionary stands out. His name: Jacques Marquette. Born in France in 1637, Marquette became a Jesuit at the age of 17. Possessing a keen desire for adventure, coupled with a true missionary's compassion and a gift for linguistics, it was not long before Marquette was assigned as a missionary to New France. Once there, his daring nature drove him into the wilderness of the Great Lakes, establishing missions and preaching the gospel to even the most remote tribes. Never hesitant to risk death by exposure, starvation, or Iroquois raid, Marquette would continue to minister to tribes as far south as the Arkansas River until his death in 1675.

While such a remarkable figure might intimidate even the seasoned essayist, Agnes Repplier once again shows herself to be both a gifted storyteller and consummate biographer. Maintaining historical accuracy without sacrificing her own dramatic flair, she weaves a tale of priestly valor truly worthy of its subject matter.