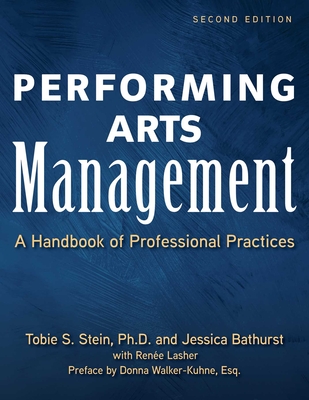 
Not On Our Shelves—Ships in 1-5 Days
Do you know what it takes to manage a performing arts organization today? In this revised second edition of the comprehensive guide, more than 100 managers of top nonprofit and commercial venues share their winning strategies.

From theater to classical music, from opera to dance, every type of organization is included, with information on how each one is structured, key managerial figures, its best-practices for financial management, how it handles labor relations, and more.

Learn to manage a performing arts group successfully in today’s rapidly changing cultural environment with Performing Arts Management.
Tobie S. Stein, Ph.D. is a global arts leadership author, speaker, and educator. She is a two-time Fulbright Specialist (Israel and Taiwan) and is a member of the Fulbright Specialist Roster. She is the author of five books, including Racial and Ethnic Diversity in the Performing Arts Workforce (Routledge) and Leadership in the Performing Arts (Skyhorse Publishing), which isalso published in Mandarin. She is a Professor at the National Sun Yat-sen University in Taiwan, a team member at the Walker International Communications Group, and a BrooklynSavvy panelista, focusing on racial justice television programming. She is a member of the Diversity Scholars Network at the National Center for Institutional Diversity, University of Michigan.

Renee Lasher received her MFA from Brooklyn College.  She is a Contract Manager at The Hearst Corporation.  Renee is also an active member of the Blue Hill Troupe, a volunteer theater group that donates all proceeds to New York City charities, and a mediation coach with the New York Peace institute.
Jessica Bathurst has served in a variety of performing arts management positions, including as Executive Director of the Astoria Performing Arts Center in Astoria, Queens, and theater management lecturer at Brooklyn College. She holds an MFA in Performing Arts Management from Brooklyn College and an MA in Classical and Contemporary Text from the Royal Conservatoire of Scotland.

Donna Walker-Kuhne, Esq. is an award-winning thought leader, writer, and strategist for community engagement, audience development, and social justice. She is President of Walker International Communications Group, a thirty-year-old boutique marketing and audience development consulting agency. She was formerly Director of Marketing for both The Public Theater and Dance Theater of Harlem. She provides consulting services to numerous arts organizations throughout the world and has generated over $22 million in earned income over the years. She is an adjunct professor at New York University and Columbia University. She is the recipient of over fifty awards including the 2022 Margot Adams Leadership Award and the 2021 SGI-USA Distinguished Pioneer Award. Her first book, Invitation to the Party: Building Bridges to Arts, Culture and Community, was published in 2005 and her second book, Champions for the Arts: Lessons and Successful Strategies for Building Anti-Racist Arts Organizations will be published in November 2022.