Church of Cowards: A Wake-Up Call to Complacent Christians (Hardcover) 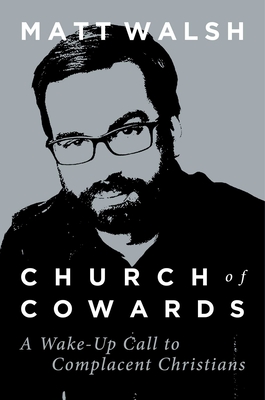 Church of Cowards: A Wake-Up Call to Complacent Christians (Hardcover)


Backordered
What Would You Surrender for God?

Christians in the Middle East, in much of Asia, and in Africa are still being martyred for the faith, but how many American Christians are willing to lay down their smartphones, let alone their lives, for the faith?

Being a Christian in America doesn’t require much these days. Suburban megachurches are more like entertainment venues than places to worship God. The lives that American “Christians” lead aren’t much different from those of their atheist neighbors, and their knowledge of theology isn’t much better either.

Matt Walsh of The Daily Wire exposes the pitiful state of Christianity in America today, lays out the stakes for us, our families, and our eternal salvation, and invites us to a faith that’s a lot less easy and comfortable—but that’s more real and actually worth something.

The spiritual junk food we’re stuffing ourselves with is never going to satisfy. As St. Augustine said over a millennium ago, our hearts are restless until they rest in Him. Only God Himself can make our lives anything but ultimately meaningless and empty. And we will never get anywhere near Him if we refuse to take up our cross and follow Jesus.

This rousing call to the real adventure of a living faith is a wake-up call to complacent Christians and a rallying cry for anyone dissatisfied with a lukewarm faith.
Matt Walsh is a nationally recognized writer, podcast host, and speaker. His podcast The Matt Walsh Show enjoys a huge following, and his columns at The Daily Wire have been read by millions. Matt is known for his controversial and provocative insights into culture, politics, and religion. He lives outside of Baltimore, Maryland, with his wife and four children.
“Matt Walsh is a powerful voice standing up for the value of religious virtue in today’s increasingly secular culture. Americans are going to church less often than ever before. Walsh explains why that trend must be reversed if America is to save itself—and its founding principles.”
— —Ben Shapiro

“In a world where religious leaders routinely trade their principles for the world’s approval, Matt Walsh remains a fearless defender of the faith. Fierce, witty, moral and often profound, Matt is a voice Christians need to hear if they want to remember who they are and who they're supposed to be.”
— —Andrew Klavan

“Matt Walsh's Church of Cowards is a desperately needed clarion call to lukewarm Christians. Too many complacent ‘believers’ are failing to engage the secular culture; they’re drowning themselves in it instead. Christianity once changed the world. The gospel could transform our lives and our civilization again—if Christians would take it seriously.”
— —David Limbaugh