The Last Letter: A Father's Struggle, a Daughter's Quest, and the Long Shadow of the Holocaust (Legacies of War) (Paperback) 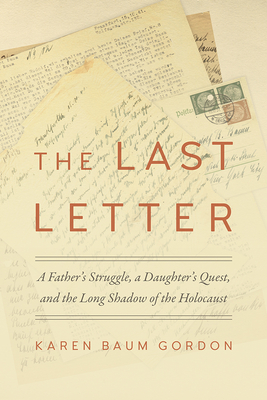 The Last Letter: A Father's Struggle, a Daughter's Quest, and the Long Shadow of the Holocaust (Legacies of War) (Paperback)

A Good Morning America Pick of the Week!

Born a German Jew in 1915, Rudy Baum was eighty-six years old when he sealed the garage door of his Dallas home, turned on the car ignition, and tried to end his life. After confronting her father’s attempted suicide, Karen Baum Gordon, Rudy’s daughter, began a sincere effort to understand the sequence of events that led her father to that dreadful day in 2002. What she found were hidden scars of generational struggles reaching back to the camps and ghettos of the Third Reich.

In The Last Letter: A Father’s Struggle, a Daughter’s Quest, and the Long Shadow of the Holocaust, Gordon explores not only her father’s life story, but also the stories and events that shaped the lives of her grandparents—two Holocaust victims that Rudy tried in vain to save in the late 1930s and early years of World War II. This investigation of her family’s history is grounded in eighty-eight letters written mostly by Julie Baum, Rudy’s mother and Karen’s grandmother, to Rudy between November 1936 and October 1941. In five parts, Gordon examines pieces of these well-worn, handwritten letters and other archival documents in order to discover what her family experienced during the Nazi period and the psychological impact that reverberated from it in the generations that followed.

Part of the Legacies of War series, The Last Letter is a captivating family memoir that spans events from the 1930s and Hitler’s rise to power, through World War II and the Holocaust, to the present-day United States. In recreating the fatal journeys of her grandparents and tracing her father’s efforts to save them an ocean away in America, Gordon discovers the forgotten fragments of her family’s history and a vivid sense of her own Jewish identity. By inviting readers along on this journey, Gordon manages to honor victim and survivor alike and shows subsequent generations—now many years after the tragic events of World War II—what it means to remember.

A graduate of Harvard College and Columbia Business School, Karen Baum Gordon co-founded Strategic Horizons, Inc., an executive coaching and management consulting firm. Karen is a Dallas native and now lives with her husband and black lab in Brooklyn, New York, and South Hero, Vermont. She is an active member of Brooklyn Heights Synagogue and recently served as president of the congregation.

“In this haunting and remarkable book, Karen Baum Gordon reminds is that the Holocaust is a story that remains with us, and that storytellers like her are essential in passing the story from generation to generation.”—Michael Shapiro, Professor of Journalism, Columbia Journalism School

“Both a very private account and a general outline of the German Jewish experience of the twentieth century, The Last Letter comprises the story of a family that contributed so much and lost so much. Allowing herself intimacy and trepidation in her reflections, Karen Baum Gordon offers one of the central intellectual challenges of Jewish existence in the aftermath of the Holocaust—the question of how to comprehend the ruptures that the Shoah denotes. This book names the ghosts of the past that haunt us, and it charges us to change our world for the better.”—Rabbi Prof. Dr. Walter Homolka, Rector, Abraham Geiger College, Potsdam, Germany

“The Last Letter is a compelling and beautifully written illustration of how individual family stories are critical to the ongoing and evolving process of Holocaust remembrance. Investigations like these, conducted by the children of the victims, provide compelling evidence about those who perished and those who survived, but also about the continuing impact on their descendants.”—William H. Weitzer, John H. Slade Executive Director, Leo Baeck Institute–New York and Berlin