The Cedar Choppers: Life on the Edge of Nothing (Sam Rayburn Series on Rural Life, sponsored by Texas A&M University-Commerce #24) (Paperback) 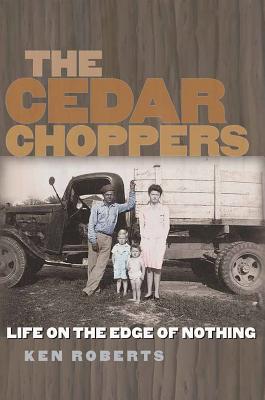 The Cedar Choppers: Life on the Edge of Nothing (Sam Rayburn Series on Rural Life, sponsored by Texas A&M University-Commerce #24) (Paperback)


Not On Our Shelves—Ships in 1-5 Days
During this pre-teen years, Ken Roberts had his first encounter with cedar choppers west of Austin, which provoked the question, “Who are these people?” The Cedar Choppers: Life on the Edge of Nothing is his entertaining, and informative answer. Based on interviews with several generations of cedar choppers and others, Roberts weaves together the lively, gritty story of these largely Scots-Irish migrants with roots in Appalachia who settled on the west side of the Balcones Fault during the mid-19th century, subsisting on hunting, trapping, moonshining, and, by the early 20th century, cutting, transporting, and selling cedar fence posts and charcoal.

“Meticulously researched and engagingly written, Ken Roberts’ The Cedar Choppers leads us on a fascinating journey to the heart of this legendary Texas subculture.”— Steven L. Davis, PEN USA–winning author and past president, Texas Institute of Letters

“The best Texas book I’ve read of late was The Cedar Choppers: Life on the Edge of Nothing by Ken Roberts. It doubles as one of the most instructive books about Austin’s history and culture.”—Austin American Statesman

Number Twenty-four: Sam Rayburn Series on Rural Life, sponsored by Texas A&M University–Commerce
KEN ROBERTS is retired from Southwestern University in Georgetown, Texas, where he held the Cullen Chair of Economics. His teaching and research focused on the effects of economic change on rural people, first in Mexico and then in China. He and his family have lived on a ranch outside Liberty Hill, Texas, for more than forty years.
“This book is for anyone who enjoys learning more about a hidden but fascinating story of human migration, and the power of a relatively small group to have a large impact on the region.”—Great Plains Quarterly
— Great Plains Quarterly