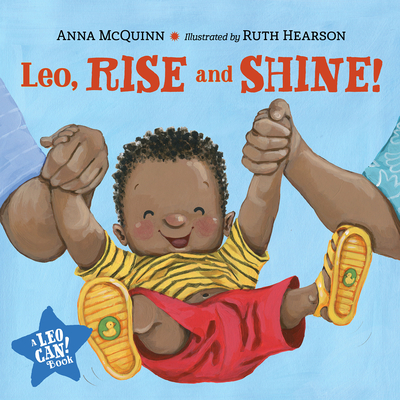 
On Our Shelves Now at:
Leo, Lola’s little brother from Leo Loves Mommy and Leo Loves Daddy, is back in a new good-morning story that wakes his whole body up!

Perfect for establishing morning routines, this sweet companion to Leo, Sleep Tight! and spin-off of the best-selling Lola Reads series is sure to delight. Leo has had a big sleep, and it is time to get ready for the day. He wakes up with a morning routine focused on his head, shoulders, knees, and toes until he is energized and ready for anything!
Anna McQuinn has worked in children's books for more than thirty years as an editor, publisher, and writer. She has written more than twenty books for children, including the Lola Reads series. Anna has extensive experience running groups for young children and their parents at her local library.

Ruth Hearson has illustrated several children's books, including Leo Can Swim, Leo Loves Mommy, Leo Loves Daddy, and Cinnamon's Fairy Sleepover. She currently resides in York, England.
A toddler goes through his morning routine with his father and mother: play, breakfast, toothbrushing, dressing, dancing, and heading out for an adventure. Jubilant, soft-textured illustrations depict an easy warmth and bubbly energy shared by all three Black family members. The cheery sequence of activities may serve as a valuable tool for young readers learning to internalize a predictable morning routine.

VERDICT A bright and bouncy addition to the shelves.


Leo, a young brown-skinned boy, awakes from a night of rest, ready to greet the day.

The sun greets Leo (whom readers may recognize from other titles in the series devoted to his daily life), still in bed as his caregiver opens the curtains of the window near his crib. Developmentally appropriate language playfully captures the movement of toddlers, making this exploration of a happy child’s morning appropriate for group read-alouds and lap reads. Leo “shakes awake” with a box of cereal and goes through his morning routine: munching on “crunchies,” sipping “zingy juice,” and brushing his teeth in the mirror alongside a parent shaving. Finally dressed, he is “wide awake and ready for anything.” The short, descriptive sentences, which appear on most pages, describe the world as experienced by toddlers: “The lemon-yellow sun sparkles in”; “Leo has had a big sleep”; he “shimmies into sharp shorts.” Hearson’s gentle illustrations, which use a soft palette of colors dominated by blues and greens, evoke feelings of harmony and depict a trusting and loving relationship between Leo and his caregivers, who appear to be Black. What a joyful morning!