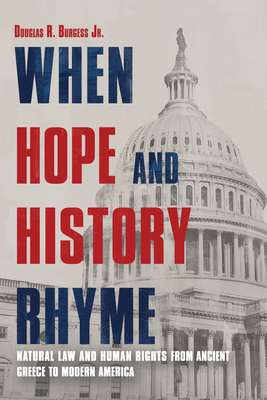 
Not On Our Shelves—Ships in 1-5 Days
An exploration of natural law for an era of deep division: Burgess lays out the long struggle to protect human rights for all citizens.

Dr. King's famous words—"The arc of the moral universe is long, but it bends towards justice”—rest on the thinking and policy of philosophers and legislators from ancient Greece to the present day.

Douglas R. Burgess Jr.—a broadly published writer and professor of legal history—tells us that important story, from the Greeks to the Middle Ages to the Enlightenment, ending with FDR's "Four Freedoms" and the Nuremberg Trials. With timely reference to recent assaults on human rights, including the 2021 attack on the US Capitol, When Hope and History Rhyme has both historical sweep and contemporary significance.

Douglas R. Burgess Jr. is a jurist and historian. His numerous published works have examined the legal linkages between piracy and organized terrorism, the use of the trial to establish dominant historical narratives, and the development of a distinctly American criminal jurisprudence in the seventeenth and eighteenth centuries. Dr. Burgess is a professor of history at Yeshiva University and an affiliated instructor at the Benjamin Cardozo School of Law in New York City. He and his husband recently restored a 175-year-old Hudson Valley home, which they share with their excessively friendly Labrador, Makhni.