Borrowing Life: How Scientists, Surgeons, and a War Hero Made the First Successful Organ Transplant a Reality (Hardcover) 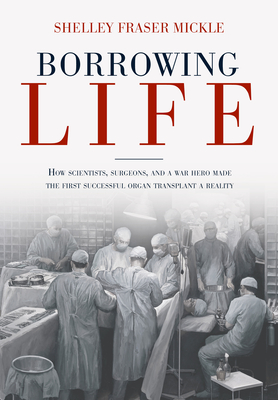 Borrowing Life: How Scientists, Surgeons, and a War Hero Made the First Successful Organ Transplant a Reality (Hardcover)


Special Order—Subject to Availability
Against a global backdrop of wartime suffering and postwar hope, Borrowing Life gathers the personal histories of the men and women behind the team that enabled and performed the modern medical miracle of the world's first successful organ transplant.

"An extraordinary work. Shelley Fraser Mickle has not only provided a detailed, fascinating documentation of the world's first successful organ transplant, but she has also painted the lives of those involved--doctors, patients, family members--so vividly that the reader is completely enthralled and emotionally invested in their grieved losses as well as their successes. The result is a beautiful tribute to medical science as well as to humanity."
Jill McCorkle, NYT bestselling author of Life After Life

"Working with Dr. Moore, Dr. Murray and Dr, Vandam to create the painting commemorating their historic operation and the research leading up to it was the greatest adventure of my artistic career. Having my painting on the cover of Borrowing Life renews that excitement, for I know what grand adventure is waiting for the reader." Joel Babb, artist

"I was so very pleased to be involved with Shelley as she wrote her captivating, compelling book. I only wish that Ron could be here with me to read it."
Cynthia Herrick, wife of the first successful organ transplant donor

"Had these men and women not worked diligently to save the life of Charles Woods, I and my 5 brothers and 3 sisters, would not have been born. Charles Woods and Miriam Woods are my parents. It is thrilling to read Ms Mickle's book as it closely mirrors the stories our dad and mom shared with us as children. The amazing thing is that as a disfigured war hero, our dad embraced his appearance as a badge of honor."
David Woods

Performed at Boston's Peter Bent Brigham Hospital in 1954, the first successful kidney transplant was the culmination of years of grit, compassion, and the pursuit of excellence by a remarkable medical team--Nobel Prize-winning surgeon Joseph Murray, his boss and fellow surgeon Francis Moore, and British scientist and fellow Nobel laureate Peter Medawar. Drawing on the lives of these members of the Greatest Generation, Borrowing Life creates a compelling narrative that begins in wartime and tracks decades of the ups and downs, personal and professional, of these inspiring men and their achievements, which continue to benefit humankind in so many ways.
Shelley Fraser Mickle is an award-winning novelist whose first novel, The Queen of October, was a New York Times Notable Book and selected by Library Journal as one of the ten best adult books suitable for young adults. Her novel Replacing Dad won an America's Writers Award in Chicago and was adapted for film. Her nonfiction book for middle-grade readers, Barbaro, America's Horse, won a Bank Street Award, and American Pharaoh, Triple Crown Champion, was chosen by the New York Public Library as one of the best nonfiction books for children in 2017. From 2000 to 2006 she was a commentator for National Public Radio's "Morning Edition." Her husband trained under the Brigham surgeons who are the focus of Borrowing Life.
Novelist and biographer Mickle (American Pharaoh) traces the long road to the first successful human kidney transplant, in 1954, in this involving chronicle. Avoiding medical jargon, Mickle uses her storytelling skills to bring the doctors and patients involved to life. She writes particularly admiringly of the three individuals central to the breakthrough: Boston surgeons Francis Moore and Joseph Murray and London researcher Peter Medawar, the latter two both Nobel Prize winners for their work. She captures distinguishing features of their lives—Moore’s patrician New England roots; the ostracism which the Lebanese-British Medawar sometimes endured due to his “Arab blood”—and personalities—Murray’s cheerful, almost childlike nature. She also conveys the determination they needed to overcome the problem of autoimmune rejection of foreign organs, over the course of many surgeries. Mickle provides biographies for many of the patients involved, including Richard Herrick, whose genetic compatibility with his identical twin, Ronald, proved the key, allowing the pivotal 1954 operation to take place. Readers will find this an uplifting look at the quest to make transplants the routine lifesaving procedures they have become.
—Publishers Weekly

Admiring biographies of a scientist, two surgeons, and several patients whose lives came together in a 1954 kidney transplant, the first that succeeded, heralding a medical revolution that continues to this day.Award-winning novelist Mickle (The Occupation of Eliza Goode, 2013, etc.) turns her attention to nonfiction while making generous use of her storytelling skills. Her heroes are Peter Medawar (1915-1987), a British scientist considered the father of transplantation, who discovered the phenomenon of acquired immunological tolerance—conditions under which the body would not reject a foreign tissue; and Francis Moore (1913-2001), the youngest chairman of surgery in Harvard's history, who aggressively supported many breakthrough techniques, including those of Joseph Murray (1919-2012) who performed the first successful transplant, a kidney, between identical twins, in 1954. More significantly, Murray did the same with an unrelated donor in 1962. In her enthusiastic narrative, Mickle pays close attention to patients, especially Charles Woods, who suffered catastrophic burns in a World War II plane crash and underwent years of surgery, many by Dr. Murray, to restore his face and hands. During his later experiments, Murray remembered that foreign skin transplants lasted much longer on the debilitated Woods. Readers will enjoy the author's lucid account of the history of transplants and the difficulties faced by the pioneers, and she also offers generous accounts of their courtships, marriages, and offspring. At the end of the book, Mickle, whose husband trained under Moore and Murray, includes a chronology and instructions on becoming a kidney donor. "Over a decade," writes the author, her subjects "pioneered the giving and taking of organs that one of the surgeons called ‘spare-parts surgery,' or borrowing life, which in no way belittled the ultimate gift of retrieving life for one so close to losing it."An irresistible if often gruesome account of a great medical struggle that featured a happy ending.


Mickle (American Pharaoh) uses her novelist’s skills for characterization and plot in this well-researched story of Charles Woods, an eccentric World War II pilot severely burned in a plane accident; Joe Murray, his young doctor at Valley Forge Hospital with only nine months of surgical training; Francis Moore, his Harvard-trained boss; and Peter Medawar, a zoology graduate student at Oxford who used his biological training to create successful skin grafts for British soldiers injured during the war. Inspired by Woods’s determination to live despite several surgeries and severe pain, Murray and Moore’s work on skin grafts and the body’s acceptance or rejection of them led to work on kidney transplantation, which had the same obstacles, at Brigham Hospital in Boston. Medawar’s key discoveries helped them succeed with the first successful organ transplant at Boston’s Peter Brent Brigham Hospital in 1954. VERDICT A thrilling and riveting story of determination, perseverance, and compassion that makes medical history accessible.
—Library Journal