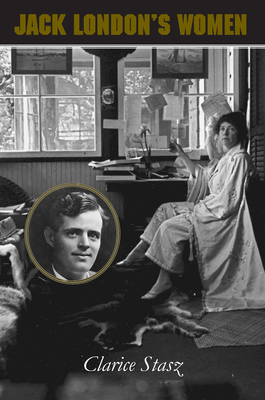 
Not On Our Shelves—Ships in 1-5 Days
(This book cannot be returned.)
At age twenty-three, Jack London (1876–1916) sold his first story, and within six years he was the highest paid and most widely read writer in America. To account for his success, he created a fiction of himself as the quintessential self-made man. But as Clarice Stasz demonstrates in this absorbing collective biography, London always relied on a circle of women who nurtured him, sheltered him, and fostered his legacy.

Using newly available letters and diaries from private collections, Stasz brings this diverse constellation of women to life. London was the son of freethinking Flora Wellman, yet found more maternal comfort from freed slave Jennie Prentiss and his stepsister Eliza. His early loves included a British-born consumptive, a Jewish socialist, and an African American. His first wife, Bess Maddern, was a teacher and devoted mother to daughters Bess and Joan, while his second wife, Charmian Kittredge, shared his passion for adventure and served as a model for many characters in his writings. Following his death, the various women who survived him both promoted his legacy and suffered the consequences of being constantly identified with a famous man.

In recasting London's life through the eyes of three generations of women, Stasz manages to untangle his seemingly contradictory attitudes and actions. She also reveals the struggle that ensued, after his death, among family members and scholars over how he should be remembered. What emerges from this well-researched book is a new understanding of London and a compelling portrayal of the women who knew him best.
Clarice Stasz is professor of history at Sonoma State University. Her books include The Vanderbilt Women, The Rockefeller Women, and American Dreamers.
"Stasz's portrait of London is a unique view of the man at home, a home defined by the women in his life. . . . Now we are able to see London the patriarch, an incredibly significant part of his identity, without having to excuse it or cover it up with assertions about the greatness of his art. . . . This book is a masterpiece of archival research. It is invaluable."—Jay Williams, editor of the Jack London Journal

"Writers like Ernest Hemingway and Jack London, notorious for their hard drinking, womanizing, and adventure seeking, are ripe for biographies that focus on the women in their lives. Can these men really embody the monolithic machismo they project to the public, or is there another story to tell in private? In this biography, Stasz (history, Sonoma State Univ.; The Vanderbilt Women) uses newly available letters and diaries to flesh out the various women who knew London best: his mother, a stepsister, a friend, his first wife, two daughters, and, most of all, his second wife, Charmian. What results is a view of London the patriarch, a persona that fits all too comfortably with his hypermasculine image. Within the context of his family, he appears manipulative, miserly, and, at times, downright cruel. (In one letter he compares his daughter Joan to a "ruined colt" that can't be trained: "I say let the colt go. Kill it, sell it, give it away.") As for his women, their stories feel blunted and lackluster, never fully developed apart from their relation to London's fame. Recommended only for academic libraries"—Library Journal