A People's History of the New Boston (Paperback) 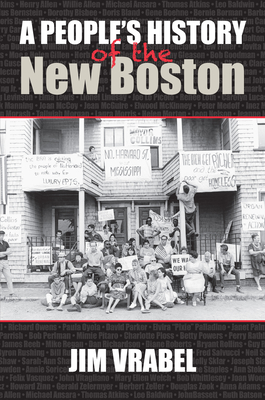 A People's History of the New Boston (Paperback)


Special Order—Subject to Availability
Although Boston today is a vibrant and thriving city, it was anything but that in the years following World War II. By 1950 it had lost a quarter of its tax base over the previous twenty-five years, and during the 1950s it would lose residents faster than any other major city in the country.

Credit for the city's turnaround since that time is often given to a select group of people, all of them men, all of them white, and most of them well off. In fact, a large group of community activists, many of them women, people of color, and not very well off, were also responsible for creating the Boston so many enjoy today. This book provides a grassroots perspective on the tumultuous 1960s and 1970s, when residents of the city's neighborhoods engaged in an era of activism and protest unprecedented in Boston since the American Revolution.

Using interviews with many of those activists, contemporary news accounts, and historical sources, Jim Vrabel describes the demonstrations, sit-ins, picket lines, boycotts, and contentious negotiations through which residents exerted their influence on the city that was being rebuilt around them. He includes case histories of the fights against urban renewal, highway construction, and airport expansion; for civil rights, school desegregation, and welfare reform; and over Vietnam and busing. He also profiles a diverse group of activists from all over the city, including Ruth Batson, Anna DeFronzo, Moe Gillen, Mel King, Henry Lee, and Paula Oyola. Vrabel tallies the wins and losses of these neighborhood Davids as they took on the Goliaths of the time, including Boston's mayors. He shows how much of the legacy of that activism remains in Boston today.
Jim Vrabel is a longtime Boston community activist and historian. He is author of When in Boston: A Time Line & Almanac and Homage to Henry: A Dramatization of John Berryman's "The Dream Songs."
"Jim Vrabel has written a great book, one that needed to be written and explains clearly and compellingly how the residents of Boston's neighborhoods worked together to build a better city, resisting the 'experts' to make the New Boston their own."—Robert Allison, author of The American Revolution: A Concise History

"Vrabel has resurrected the voices of so many everyday (and yet extraordinarily fierce!) neighborhood folks who have stood up to the powers that be and grabbed the reins of leadership on all issues that directly impacted their lives. In this book, history is not only prelude to present, it is inspiration to all of us that we can indeed change our future."—Michael Patrick MacDonald, author of All Souls: A Family Story from Southie

"This is a fascinating study of grassroots social movements in Boston neighborhoods during the 1960s and 70s. The book will appeal to both a popular audience for Boston history as well as being a valuable resource for students and scholars of late twentieth century urban history."—Marilynn Johnson, author of Street Justice: A History of Police Violence in New York

"A People's History of the New Boston is granular in the research and grandly revealing in the telling of a recent time past in Boston's history reminiscent of the revolutionary 1770s and the abolitionist 1850s, when the people insisted they had something important to say about how life should be lived in their city and in their nation."—Dorchester Reporter

"This book is not intended to be a definitive study of any particular group, cause or effect but rather to give an introduction and an overview of what happened in Boston in a specific time when ordinary citizens chose to be heard. And not only to be heard but to participate in decisions that were being made that would affect their lives and communities. Their actions in combination have had perhaps the most significant effect in how Boston has come to be the city that it is today. As such the book serves as an opening door inviting a more in depth study of community dynamics and should be of particular interest to community planners, sociologists and historians."—Boston Area Small Press and Poetry Scene

"Jim Vrabel has done an honorable thing in writing A People's History of the New Boston. He has given us a 'worm's eye' view of Boston's post-WW2 evolution, countering the usual 'great man' telling of history, and starring the unsung heroes to whom we owe much more than most people know. . . . Thought-provoking."—Yankee Radical

"This well-researched and well-written book is not another history of Boston; it is a study of community politics and community activism and belongs in all academic libraries. Highly recommended."—Choice

"Vrabel drills deep into the processes of change that help explain how Boston became the city it is today. He does so by drawing on more than a decade of person interviews with some 100 past and current community activists to paint a portrait of the transition from the Old Boston to the New Boston. A People's History of the New Boston is a must-read for a new generation of community activists, politicians, government officials, students of cities and the media."—Commonwealth Magazine

"Vrabel is the Howard Zinn of Boston. After hundreds of interviews and prodigious archival research, he's written the best book about that city's history, from the perspective of the activists who battled the powers-that-be to reshape Boston into a more livable city. Vrabel chronicles the great struggles of the post-war era, including urban renewal, welfare, poverty, tenants rights, highways, gentrification, school integration, Vietnam, community development, and jobs. He gives credit to some members of Boston's business and political elite who recognized the need for change, but the book primarily gives voice to the outsiders and activists who challenged the status quo with cunning and courage."—Peter Dreier, Huffington Post