When I Came to Die: Process and Prophecy in Thoreau's Vision of Dying (Paperback) 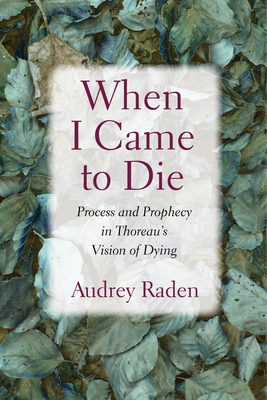 When I Came to Die: Process and Prophecy in Thoreau's Vision of Dying (Paperback)


Special Order—Subject to Availability
Scholars have long considered the elegiac characteristics of Thoreau's work. Yet few have explored how his personal views on death and dying influenced his philosophies and writings. In beautiful prose, Audrey Raden places Thoreau's views of death and dying at the center of his work, contending that it is crucial to consider the specific historical and regional contexts in which he lived—nineteenth-century New England—to fully appreciate his perspectives. To understand death and dying, Thoreau drew on Christian and Eastern traditions, antebellum Northern culture, Transcendentalism, and his personal relationship with nature. He then suffused his writings with these understandings, through what Raden identifies as three key approaches—the sentimental, the heroic, and the mystical.

When I Came to Die suggests that throughout his writings, Thoreau communicated that knowing how to die properly is an art and a lifelong study, a perspective that informed his ideas about politics, nature, and individualism. With this insight, Raden opens a dialogue that will engage both Thoreauvians and those interested in American literature and thought.
Audrey Raden is an independent scholar currently working toward a master of divinity degree at New York Theological Seminary.
"In her poignant and eloquent book, Audrey Raden shows how, for Thoureau, death and dying were among the most essential facts of life, and that to live life to the fullest meant to live it in full awareness of its mortality.""—Robert Pogue Harrison, Stanford

"Audrey Raden prompts us to confront the significance of death and dying in Thoreau's life and writings and thereby to rethink his ideas about nature, time, divinity, and the self. The result is powerful and unprecedented."—Robert Gross, author of The Transcendentalists and Their World

"An elegantly written book and a must-read for anyone interested in nineteenth-century American literature and culture."—David S. Reynolds, author of Waking Giant: America in the Age of Jackson

"When I Came to Die offers a Thoreau who invests his selfhood into textual signification, who wields himself on the page, as it were, as the ultimate figure of the self-made individual."—American Literature