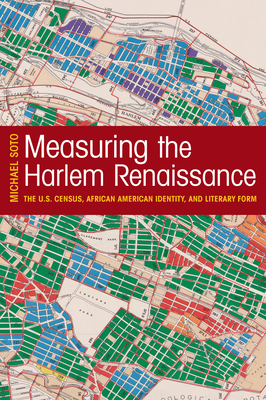 
Special Order—Subject to Availability
In this provocative study, Michael Soto examines African American cultural forms through the lens of census history to tell the story of how U.S. officialdom—in particular the Census Bureau—placed persons of African descent within a shifting taxonomy of racial difference, and how African American writers and intellectuals described a far more complex situation of interracial social contact and intra-racial diversity. What we now call African American identity and the literature that gives it voice emerged out of social, cultural, and intellectual forces that fused in Harlem roughly one century ago.

Measuring the Harlem Renaissance sifts through a wide range of authors and ideas—from W. E. B. Du Bois, Rudolph Fisher, and Nella Larsen to Zora Neale Hurston, Langston Hughes, and Wallace Thurman, and from census history to the Great Migration—to provide a fresh take on late nineteenth—and twentieth—century literature and social thought. Soto reveals how Harlem came to be known as the "cultural capital of black America," and how these ideas left us with unforgettable fiction and poetry.
Michael Soto is associate professor of English at Trinity University and author of The Modernist Nation: Generation, Renaissance, and Twentieth-Century American Literature.
"Measuring the Harlem Renaissance takes Harlem Renaissance studies in a valuable new direction, offering a reading of the metaphorical meaning of the New Negro movement and Black Modernism through the way in which not only the U.S. state recorded and determined racial identity, but, more important, how New Negro intellectuals articulated blackness and African American identity during the interwar, modernist period."—Gary Holcomb, author of Claude McKay, Code Name Sasha: Queer Black Marxism and the Harlem Renaissance

"In this fascinating book, Soto takes a new and startling approach to understanding the racial divides and communities that informed the literature of the Harlem Renaissance: he peers at the subject through the lens of the US census. . . . This deft study demonstrates what can be learned about literature (assuming the use of accessible language) from nontraditional tools—including game theory, geostatistics, and urban planning data. Highly recommended."—Choice