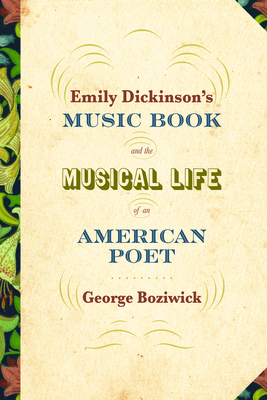 After years of studying piano as a young woman in her family home in Amherst, Massachusetts, Emily Dickinson curated her music book, a common practice at the time. Now part of the Dickinson Collection in the Houghton Library of Harvard University, this bound volume of 107 pieces of published sheet music includes the poet’s favorite instrumental piano music and vocal music, ranging from theme and variation sets to vernacular music, which was also enjoyed by the family’s servants.

Offering a fresh historical perspective on a poetic voice that has become canonical in American literature, this original study brings this artifact to life, documenting Dickinson’s early years of musical study through the time her music was bound in the early 1850s, which tellingly coincided with the writing of her first poems. Using Dickinson’s letters and poems alongside newspapers and other archival sources, George Boziwick explores the various composers, music sellers, and publishers behind this music and Dickinson’s attendance at performances, presenting new insights into the multiple layers of meaning that music held for her.

GEORGE BOZIWICK retired as chief of the Music Division of The New York Public Library for the Performing Arts.

“Emily Dickinson’s Music Book and the Musical Life of an American Poet is a treasure trove of details about music and music education in nineteenth-century America. By far, Boziwick’s book is the most detailed and extensive study yet of the music in Dickinson’s personal collection. His is a fascinating contribution to Dickinson scholarship.”—Sandra Runzo, author of “Theatricals of Day”: Emily Dickinson and Nineteenth-Century American Popular Culture

“Boziwick makes a significant contribution to the field by providing the first in-depth examination of Emily Dickinson’s music book, shedding light on its sheets of music and illuminating them for all who are interested in the musical life of the poet.”—Victoria N. Morgan, author of Emily Dickinson and Hymn Culture: Tradition and Experience