Dictionary of Espionage and Intelligence: Over 800 Phrases Used in International and Covert Espionage (Paperback) 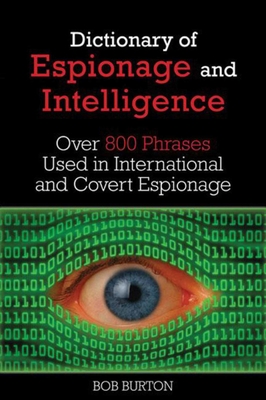 Dictionary of Espionage and Intelligence: Over 800 Phrases Used in International and Covert Espionage (Paperback)


Special Order—Subject to Availability
From Bob Burton — a former member of both the civilian and military intelligence communities and America’s most feared bounty hunter — comes the complete lexicon of over 800 terms and meanings used in international and covert espionage. Dictionary of Espionage and Intelligence includes the most up-to-date terminology of special operations from A to Z, including:

• Breaktime: The time it takes to break down he resistance level of a subject in an interrogation of a brutal nature — usually 5-7 hours
• Hero Project: A project, operation, or extraction considered too dangerous, with only the most skilled personnel able to pull it off.
• Cake or Death: An unspoken but soon-realized ultimatum that a prisoner of the spook war understands as his personal fate — cooperate or die.

Compiled by a man who knows covert action and clandestine warfare from the inside out, Dictionary of Espionage and Intelligence is a perfect compendium of the secret language spoken by those who fight the silent war.
Bob Burton, America’s #1 bounty hunter, with several thousand arrests to his credit, is an ex-Force Recon Marine and the author of several bail enforcement instruction books. He lives in West Palm Beach, Florida.