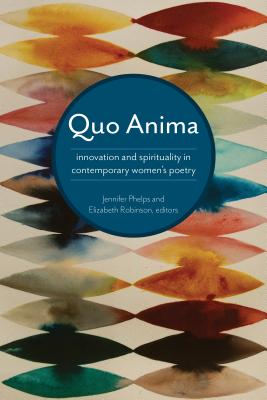 
Special Order—Subject to Availability
Quo Anima studies the poetry of contemporary women poets in relation to spirituality and innovative form. In the past two decades, a lively conversation has taken shape as more and more poets have risked engagement with various forms of mysticism. However, much of the critical response to this work has focused on male writers: there is a critical gap where women poets and the subject of spirituality is concerned. Quo Anima addresses that gap by offering a wide array of responses to women writers who are engaging with questions of spirituality. This anthology is distinctive not only for its subject matter but also because it includes essays, interviews, personal statements, and poems. In addition, all of the contributing authors are poets. The collection considers the work of accomplished poets including (but not limited to) Brenda Hillman, Fanny Howe, Susan Howe, Alice Notley, Cole Swensen, and Cecilia Vicuna as well as a range of less widely-known, yet significant, poets.
Elizabeth Robinson is the author of many volumes of poetry, including On Ghosts, a Los Angeles Times Book Award finalist. She has been the winner of the National Poetry Series and the Fence Modern Poets Prize. In addition, Robinson has been the recipient of grants from the Fund for Poetry and the Foundation for Contemporary Arts and has been awarded residencies at the Djerassi Residential Artists Program, the MacDowell Colony, the Marin Headlands Center for the Arts, and the Maison Dora Maar.Jennifer Phelps is a poet, writer, and editor in the Denver area currently working with authors of full-length books, dissertations, and memoirs (see www.jenniferphelps.com.) She graduated with an MFA in Writing and Poetics from Naropa University in 2009. Her publications include Memory: a space between breaths (Shadow Mountain Press, 2013), "Stepping In" in Fearless Nest (Lulu Press, 2010), Grandmother God (Eyries Press, 1998), as well as poems, book reviews, and essays in various literary magazines such as Fact Simile, Bombay Gin, and Jacket2.