Memphis, Martin, and the Mountaintop: The Sanitation Strike of 1968 (Hardcover) 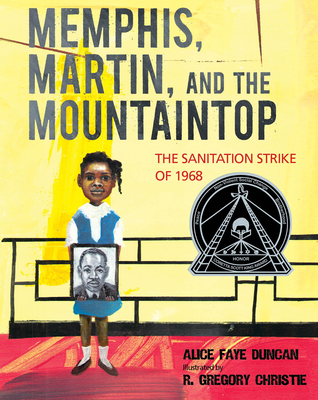 Memphis, Martin, and the Mountaintop: The Sanitation Strike of 1968 (Hardcover)

★"(A) history that everyone should know: required and inspired." —Kirkus Reviews

This picture book tells the story of a nine-year-old girl who in 1968 witnessed the Memphis sanitation strike - Dr. Martin Luther King Jr.'s final stand for justice before his assassination - when her father, a sanitation worker, participated in the protest.

In February 1968, two African American sanitation workers were killed by unsafe equipment in Memphis, Tennessee. Outraged at the city's refusal to recognize a labor union that would fight for higher pay and safer working conditions, sanitation workers went on strike. The strike lasted two months, during which Dr. Martin Luther King Jr. was called to help with the protests. While his presence was greatly inspiring to the community, this unfortunately would be his last stand for justice. He was assassinated in his Memphis hotel the day after delivering his "I've Been to the Mountaintop" sermon in Mason Temple Church. Inspired by the memories of a teacher who participated in the strike as a child, author Alice Faye Duncan reveals the story of the Memphis sanitation strike from the perspective of a young girl with a riveting combination of poetry and prose.

R. Gregory Christie has illustrated more than fifty books for young adults and children. His work has won a Caldecott Honor, a New York Times 10 Best Illustrated Children's Books of the Year Award (two times), the Coretta Scott King Honor in Illustration (three times), the NAACP's Image Award, the Boston Globe-Horn Book Award, and the Theodor Seuss Geisel Award. He currently operates his store of autographed children's books, GAS-ART Gifts, in Decatur, Georgia. Visit gas-art.com.
★ “Duncan creates 9-year-old Lorraine Jackson to tell the full story of the Memphis sanitation strike of 1968. The author's choice to not focus on the singular efforts of King but on the dedicated efforts of community signals a deeply important lesson for young readers. Strong historical details back up the organizing feat…(t)he narrative is set in vignettes that jump between verse and prose, set against Christie's bold paintings… encapsulates the bravery, intrigue, and compassion that defined a generation, presenting a history that everyone should know: required and inspired.” – Kirkus Reviews, starred review

★“In this impressive picture book, a character inspired by an African American family involved in the 1968 Memphis sanitation strike tells her first-person account of the experience in verse and prose. Each full-page spread functions as a chapter with…informative back matter (which)…includes a time line and source notes. The excellent gouache art is typical of Christie’s distinctive and impactful style, with impressionistic images set on pages saturated with shades of blue, yellow, or orange. Most gratifyingly, the determination of the characters and the import of this part of history are imbued with dignity throughout.” – Booklist, starred review

★ “The boldly colored, vivid illustrations add to the meaning of the story. The book could be read many times and new information would be discovered with each new reading….(T)he author uses descriptive words that make this book excellent to use as a mentor text for writing. Each choice in diction conjures a specific meaning and acts as the perfect word to help the reader picture and feel what is happening in the story.” -- School Library Connection, starred review

★“With Memphis, Martin, and the Mountaintop, Alice Faye Duncan…takes as her subject Martin Luther King's last campaign, and she makes clear that, while he didn't live to see its outcome, his work was not in vain. R. Gregory Christie…displays his unmistakable style…in his ennobling art, humanity is always paramount. (A)n inspiring account in which a heroic campaign lost its leader but nevertheless marched on to victory.” -- Shelf Awareness, starred review

★ “The language throughout (the book) is powerful. Christie’s Acryla gouache paintings are breathtaking... The text is fully researched, with cited sources, and draws many details from interviews with a Memphis teacher who experienced this moment in history as a child. A superbly written and illustrated work. A first purchase for public and school libraries.” – School Library Journal, starred review