Am I Crazy?: An Unapologetic Patriot Takes on the Insanity of Today's Woke World (Hardcover) 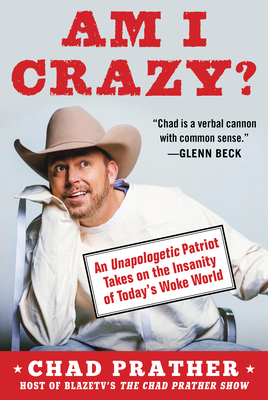 Am I Crazy?: An Unapologetic Patriot Takes on the Insanity of Today's Woke World (Hardcover)


Not On Our Shelves—Ships in 1-5 Days
Chad is a verbal cannon with common sense. -- Glenn Beck "This book is classic Chad Prather, which is to say insightful, manly, funny--absolute must read " -- Dinesh D'Souza The World needs Chad Prather more than ever. He's a throwback to a saner and more fun-loving America. His rants are OUR rants. -- Charlie Kirk "In a time when we are constantly lectured by powerful elites, Chad Prather brings a much needed common sense sanity to the political landscape. I unapologetically endorse this patriot." -- Dave Rubin

Chad Prather -- "a modern-day Will Rogers" -- is just your friendly neighborhood cowboy philosopher, gazing into the sweet tea leaves at the bottom of his cowboy hat, pondering a most fundamental question: "Am I crazy? Or is the world crazy...?" Chad finds life amusing, baffling, sometimes heartwarming, and downright interesting, and wants to share personal stories and witty observations on the hasty growth of insanity within the folds of society, and inspire critical thinking about the state of our modern culture.

In this series of humorous essays -- reminiscent of the rants he is famous for doing from his truck in Texas -- Chad takes on all the problems he has with the modern age, and also talks about some of the problems that we have with each other. Problems with kids, problems with spouses, problems with our bosses at work, and of course problems with all those other jackwagons we work with. What are some of the basic things you need to know if you're going to survive marriage and parenthood? Whatever happened to decency, hard work, and a sharing of the basic values that made us great in the first place? When did it become unfashionable to believe in God, to go to church on Sunday, or to send our "thoughts and prayers" toward those having a difficult time? When did it become child abuse to spank your kids, instead of child abuse to avoid it? Why do we have such visceral reactions to politics when -- by and large -- we know so little about how it actually works? When is social media going to finally stop messing around and just bring the full-on possession? And why is it that, as we march further and further along the road of progress -- growing our collective knowledge and technological means of dealing with life along the way -- we seem to be regressing socially at an equally break-neck pace?

AM I CRAZY?: An Unapologetic Patriot Takes on the Insanity of Today's Woke World explores human misbehavior and stupidity in all its naked splendor with laugh-out-loud humor.

CHAD PRATHER (Fort Worth, Texas) is an Unapologetically Southern Christian American Patriot Cowboy (Who) Rants From His Truck. AND... Chad Prather is running for Governor of Texas in 2022 - VOTE CHAD! Most of us are born into this world kicking and screaming, but Chad Prather most certainly came out laughing. The comedian, musician and armchair philosopher is an unapologetic champion for anyone looking for a reason to smile. Prather's God-given-gift to entertain and inspire has made him a household name, and he's grown accustomed to captivating millions of viewers on any given day. Coming from humble beginnings, Chad Prather learned to find joy and amusement in even the most unremarkable moments that life has to offer. "For me," Prather admits, "comedy really isn't all that complex. More often than not, nothing makes me laugh harder than when common sense sneaks up and wins the day." Perhaps the most compelling quality Chad Prather possesses is his refusal to compromise the things he's most passionate about. From acting and comedy to music and motivational speaking, there doesn't seem to be a field in entertainment that Prather can't conquer. Chad Prather is an American humorist, motivational speaker, and internet personality known for a series of YouTube videos filmed from his truck in which he rants on life, right-leaning politics and current events. His video Unapologetically Southern went viral in 2015 and has been viewed over 3 million times! Chad Prather has made numerous appearances on Fox News, CNN, A&E, The Blaze, MSN and more, and his talents have been praised by the likes of Southern Living, Nash Country Weekly and Newsweek. Chad is a part of the Mercury Radio and Blaze Radio networks with access to various syndicated radio shows and hosts. He also appears regularly on conservative talk radio with local affiliates and has consistent appearances on Sirius XM's Patriot Radio channel. In addition to hosting top rated Blaze TV's The Chad Prather Comedy Show and contributing weekly to One America News Network, Prather is celebrating the release of his most recent album Y'All Shut Up and embarking on his second international comedy tour. Following the immense success of Star Spangled Banter, Chad Prather will be back on the road with the Am I Crazy Comedy Tour. Fans of the fast-talking, observational humorist have branded him 'the modern day Will Rogers', but if you ask Chad, he's really "just a hooker with a good heart." For Chad Prather, taking yourself too seriously is the truest form of self-sabotage, and life is too short for that! The author lives & works (& rants from his truck) in the Dallas-Fort Worth metro area. https: //www.watchchad.com/ https: //politicalcowboy.com/ https: //prather2022.com/ https: //www.theblaze.com/podcasts/the-chad-prather-show