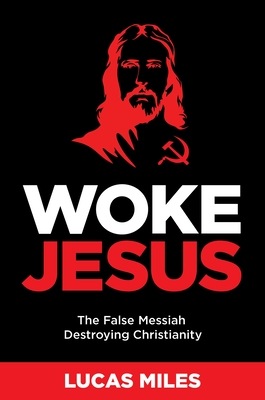 "In this bold, analytical, and readable book, Miles names names and dismantles the fallacy of progressive Christianity."

According to Luca Miles, for today's Christian Left, Jesus is only useful to the degree that His behavior aligns with liberal "morals" that support a progressive view of race, gender, and sexuality. This Jesus will need to be Woke.

Like all heresy, Woke Christianity is rooted in an element of truth, (as in God's opposition to injustice), but encapsulates this truth with a convincing web of antibiblical ideology and extremism. As such, scripture is either downgraded, stripped of its authority, or frequently ignored, as personal experience, like suffering or oppression and personal enlightenment take center stage in crafting Woke theology.

WOKE JESUS argues that few institutions are responsible for unifying the nation more than the Church. As such, it's imperative, both spiritually for the sake of the lost and geo-politically for the sake of global freedom, that orthodox Christianity prove true. For these reasons, every Christian should take seriously their role in pushing back the darkness of Wokeism and Critical Theory in all of its forms. For those requiring some practical examples of how to get started, here are some ideas:

Miles has spent years touring the country and warning of the dangers of "The Christian Left" and in In WOKE JESUS: Saving America from a False Messiah, he provides guidance and a message of action and hope:

LUCAS MILES (GRANGER, INDIANA) is a trusted voice in the American church who has consistently addressed some of the most challenging topics in theology, politics, and culture. He is the host of Edifi's award-winning The Lucas Miles Show and a co-host of The Church Boys podcast, where he has interviewed some of the biggest names in media such as Mario Lopez, Jim Cavaziel, Kathie Lee Gifford, Candace Bure, Charlie Kirk, and Sean Hannity. Lucas and his work have been featured in books and on TV and radio programs, as well as syndicated in articles across both political and religious news outlets, such as The Blaze, Faithwire, Fox News, The Washington Times, CBN, The Stream, Bible Gateway, and The Christian Post. He is also the author of the best selling book, The Christian Left: How Liberal Thought Has Hijacked the Church, as well as the critically acclaimed book Good God: The One We Want to Believe In but Are Afraid to Embrace.An ordained pastor with over twenty years of ministry experience, Lucas has been involved in dozens of church planting efforts in the US and in remote locations in Latin America, East Africa, and Asia, not least of which is his local ministry, Nfluence Church, where he and his wife, Krissy, have been serving since planting the church in 2004. Lucas had the honor of receiving an invitation to the National Prayer Breakfast in Washington, D.C., in both 2018 and 2020, as well as an invitation as a US delegate to the 2018 Ukrainian National Christian Thanksgiving Celebration.Additionally, Lucas is known for his work in Hollywood producing films and offering confidential pastoral support to many up-and-coming and established actors and artists. He has directed and produced several nationally released films, including Rodeo Girl, Crowning Jules, and The Penitent Thief, as well as consulted on dozens of entertainment and literary projects. His work has been featured on Netflix, Showtime, Fox, Redbox, Sony, and Pure Flix.Lucas is a sought-after speaker at colleges, conferences, and churches on topics such as theology, Christian living, politics, and media. Whether he is preaching through the book of Romans or discussing trends in media and culture, Lucas' heart for the gospel, philosophical prowess, and love of people always shines through, making him a perfect keynote speaker or lecturer for meetings of all sizes.Lucas and his wife, Krissy, have been married since 2001.The author lives & works in the South Bend metro area.https: //lucasmiles.org/