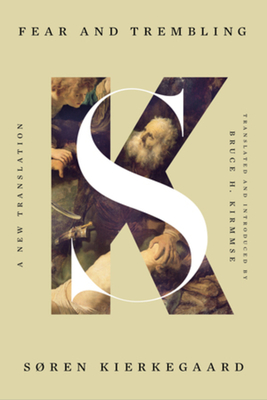 This newly translated Fear and Trembling, a foundational document of modern philosophy and existentialism, could not be more apt for our perilous times.

First published in 1843 under the pseudonym Johannes de silentio (“John of Silence”), Soren Kierkegaard’s richly resonant Fear and Trembling has for generations stood as a pivotal text in the history of moral philosophy, inspiring such artistic and philosophical luminaries as Edvard Munch, W. H. Auden, Walter Benjamin, and existentialist Jean-Paul Sartre. Now, in our era of immense uncertainty, renowned Kierkegaard scholar Bruce H. Kirmmse eloquently brings this classic work to a new generation of readers.

Retelling the biblical story of the binding of Isaac, Fear and Trembling expounds on the ordeal of Abraham, who was commanded by God to sacrifice his own son in an exceptional test of faith. Disgusted at the self-certainty of his own age, Kierkegaard investigates the paradox underlying Abraham’s decision to allow his duty to God to take precedence over his duties to his family. As Kierkegaard’s narrator explains, the story presents a difficulty that is not often considered—namely, that after the ordeal is over and Isaac has been spared at the last moment, Abraham is capable of receiving him again and living normally, even joyfully, for the rest of his days. Almost inexplicably, “Abraham had faith and did not doubt.”

Deftly tracing the autobiographical threads that run throughout the work, Kirmmse initially, in his lucid and engaging introduction, demystifies Kierkegaard’s fictive narrator, Johannes de silentio, drawing parallels between Abraham’s willingness to sacrifice his son and the author’s personal “sacrifices.” Ultimately, however, Kirmmse reveals Fear and Trembling as a fiercely polemical volume, designed to provoke the reader into considering what is actually meant by the word “faith,” and whether those who consider themselves “true believers” actually are.

With a vibrancy almost never before seen in English, and “a matchless grasp of the intricacies of Kierkegaard’s writing process” (Gordon Marino), Kirmmse here definitively demonstrates Kierkegaard’s enduring power to illuminate the terrible wonder of faith.

Soren Kierkegaard (1813–1855) was a Danish philosopher and theologian.

A professor emeritus at Connecticut College, Bruce H. Kirmmse has published several books and numerous articles on Kierkegaard and was general editor of Kierkegaard’s Journals and Notebooks. His translation of Fear and Trembling appeared in 2021. He lives in Randolph, New Hampshire, and Copenhagen, Denmark.

A professor emeritus at Connecticut College, Bruce H. Kirmmse has published several books and numerous articles on Kierkegaard and was general editor of Kierkegaard’s Journals and Notebooks. His translation of Fear and Trembling appeared in 2021. He lives in Randolph, New Hampshire, and Copenhagen, Denmark.