The Big Book of Dad Jokes: 800 Unbearable, Groan-Inducing One-Liners, Puns, and Riddles to Make You the King of Subpar Comedy (Hardcover) 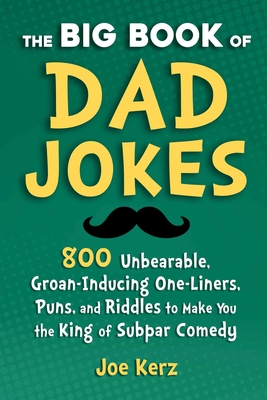 The Big Book of Dad Jokes: 800 Unbearable, Groan-Inducing One-Liners, Puns, and Riddles to Make You the King of Subpar Comedy (Hardcover)

Nothing is more hilarious for moms, sons, and daughters than the bad jokes dads tell. (Well, at least he thinks they're hilarious . . .)

Have you ever noticed when you’re out to dinner and your dad takes it upon himself to antagonize your server with a lame joke? Has he ever made a pun that made everyone at a family gathering roll their eyes? Has he ever made a corny comment about things simply lying around the house? If you answered “yes” to any of the following, you’re not alone. Dad jokes are at the center of all dad interactions and the core of every dad’s persona.

This comedic compendium compiles more than eight hundred of the best jokes dads can use to hone their craft and ensure maximum eye rolling. Included within are jokes such as:

Did you hear about the restaurant on the moon?
Great food; no atmosphere.

Did you hear about the kidnapping at school?
It’s fine, he woke up.

What do you call an elephant that doesn’t matter?
An irrelephant.

What kind of tea is hard to swallow?
Reality.

With Dad Jokes, give your dad the gift of becoming the least funny/most "punny" guy in the room.
Joe Kerz is an all-star dad and an author who has written more than one hundred books. He resides in the suburbs of New York City with his wife, children, lawn mower, and minivan.