The Hidden Lives of Owls: The Science and Spirit of Nature's Most Elusive Birds (Paperback) 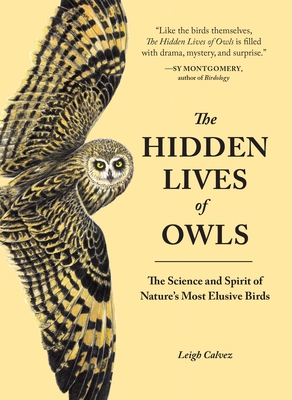 The Hidden Lives of Owls: The Science and Spirit of Nature's Most Elusive Birds (Paperback)

A naturalist explores the night forest to uncover the secret lives of eleven prevalent owl species—an illuminating book for birders, animal lovers, and readers of H is for Hawk

Join a naturalist on her adventures into the world of owls, owl-watching, avian science, and the deep forest—often in the dead of night. Whether you’re tracking snowy or great horned owls, these birds are a bit mysterious, and that’s part of what makes them so fascinating.

In The Hidden Lives of Owls, Leigh Calvez pursues eleven different owl species—including the Barred, Flammulated, Northern Saw-Whet, Northern Pygmy, Northern Spotted, Burrowing, Snowy, and Great Gray. In an entertaining and accessible style, Calvez relays the details of her avian studies, from the thuggish behavior of barred owls—which puts the spotted owl at risk—to the highly unusual appearance of arctic snowy owls in the Lower 48, which directly reflects the state of the vole population in the Arctic.

As Calvez takes readers into the lives of these strange and majestic creatures, she also explores questions about the human-animal connection, owl obsession, habitat, owl calls, social behavior, and mythology. Hoot!
LEIGH CALVEZ is a scientist and nature writer whose work has been published in American Nature Writing 2003 and Between Species: Celebrating the Dolphin-Human Bond in addition to Ocean Realm,The Ecologist,The Christian Science Monitor, theSeattle Times, and the Seattle Post-Intelligencer. She is the author of The Breath of a Whale and Whale Watching Adventures on the Pacific Coast.
“Leigh Calvez enters the world of owls with a sense of wonder as wide-eyed as her subjects. The reader shares every discovery along the way in this winning and heartfelt exploration.”
—Thor Hanson, author of Feathers and Bartholomew Quill

“Almost like spying on the neighbors, Leigh joins the brother- and sisterhood of nocturnal birders who track and measure night birds for science and for love."
—Kathleen Alcalá, author of The Deepest Roots

“You’ll come away from this riveting book blessed with owl wisdom that will enlarge your world forever.”
—Sy Montgomery, author of Birdology and The Soul of an Octopus

“Informative as it is captivating, this book is a compelling window into the science and secrets of these guardians of the forest.”
—Brenda Peterson, author of Build Me an Ark: A Life with Animals

“Calvez probes the forest at night in search of answers to the mystery [of owls], exploring topics such as owl calls, social behavior and mythology attached to the species.”
—The Chicago Tribune

"Calvez writes with feeling and is obviously in awe of these mysterious creatures.”
—Library Journal

“This enthusiastic study of the owls of the Pacific Northwest may inspire new fans and citizen scientists.”
—Shelf Awareness

“Leigh Calvez shares what she calls her ‘owl journey’ in this beautiful book, which is full of sensitive observations and high drama."
—Kristin von Kreisler, author of An Unexpected Grace and Earnest

“An owling delight.”
—The Owl Pages

"Entertaining and enlightening… a worthwhile and enjoyable read."
—Birdwatch Magazine

"[Calvez's] writing integrates the luscious imagery of her surroundings along with the scientific data and analysis... it creates such an engaging reading experience."
—Owl Eye