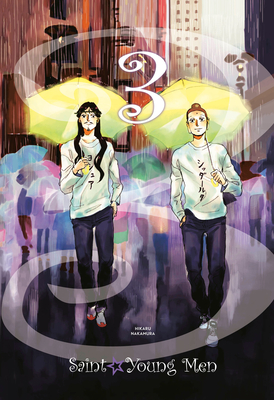 This is book number 3 in the SAINT YOUNG MEN OMNIBUS series.

The sagely saga continues as Buddha and Jesus's punny romp through Tokyo twists and turns in new directions. There are no shortages of sacros-antics as the pair and their heavenly retinue venture to Japanese tourist landmarks like Tokyo Tower, play their saintly sports, and continue to refine their comedy act - all while learning new lessons about the mundane tasks of daily life in Japan. Follow the wise-guys of Tachikawa from the dentist to Dante's Inferno!
Hikaru Nakamura has been active as a manga artist working in the genre of comedy since 2001, and before Saint Young Men, was most famous for Arakawa Under the Bridge, which is currently published by Vertical Comics and was made into an anime in 2010.