Confessions of an Egyptologist : Lost Libraries, Vanished Labyrinths & the Astonishing Truth Under the Saqqara Pyramids (Paperback) 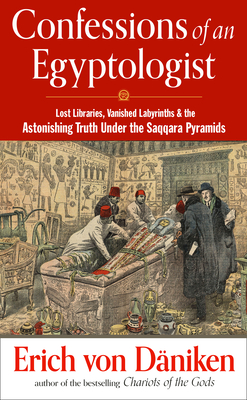 Confessions of an Egyptologist : Lost Libraries, Vanished Labyrinths & the Astonishing Truth Under the Saqqara Pyramids (Paperback)


Not On Our Shelves—Ships in 1-5 Days
Bestselling author Erich von Däniken shares the story of a 16-year-old grave-diver who discovered a mysterious labyrinth of the old kings under one of the pyramids of Saqqara.

In this book, Erich von Däniken shares the story of his friend Adel H., an Egyptologist, who, as a 16-year-old boy, was trapped for days under the Step Pyramid of Saqqara. Based on his conversations with Adel H., he retells the boy’s search for a way out of the underground world, how the boy roamed passageways and chambers and saw what he calls “impossible” things of which the professional world is completely unaware. Adel experienced uncanny events, a mixture of spirit realm and reality, which is described here for the first time. “The story of Egypt,” Adel says, “has two sides—the official one and the unknown one.”

It is secrets like the sights and events Adel experiences underground that von Däniken refers to throughout this book. Von Däniken shows that the Great Pyramid of Giza is nothing but a huge library created for the people of the future. He proves his claim through quotes from the few ancient works that still survive. Who actually had an interest for millennia in destroying knowledge/books? It’s not about a few thousand, but about millions of books. Von Däniken documents the fanatical destructive rage of the people and means: If we would only have one ten-thousandth of the former writings, human prehistory would have to be completely rewritten.

And where are the lost labyrinths? The one of Crete and the gigantic labyrinth of Egypt, of which all ancient historians reported?

Against the background of these revelations, von Däniken turns the spot on to another focus of his book. A paradigm shift in the question of extraterrestrial life: “The gods have already come back. They came down again. They are currently orbiting our planet!”
Erich von Däniken is arguably the most widely read and most-copied nonfiction author in the world. He published his first (and best known) book, Chariots of the Gods, in 1968. The worldwide bestseller was followed by 40 more books, including the recent bestsellers The Gods Never Left Us and Eyewitness to the Gods. His works have been translated into 28 languages and have sold more than 65 million copies. Several have also been made into films. Von Däniken’s ideas have been the inspiration for a wide range of television series, including History’s hit Ancient Aliens. His research organization, the A.A.S.R.A./legendarytimes.com (Archaeology, Astronautics & SETI Research Association), comprises laymen and academics from all walks of life.