The Road Taken: The History and Future of America's Infrastructure (Paperback) 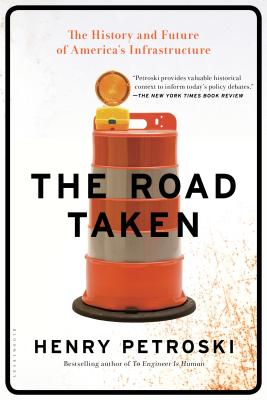 The Road Taken: The History and Future of America's Infrastructure (Paperback)

A renowned historian and engineer explores the past, present, and future of America's crumbling infrastructure.

Acclaimed engineer and historian Henry Petroski explores our core infrastructure from both historical and contemporary perspectives, explaining how essential their maintenance is to America's economic health. Petroski reveals the genesis of the many parts of America's highway system--our interstate numbering system, the centerline that divides roads, and such taken-for-granted objects as guardrails, stop signs, and traffic lights--all crucial to our national and local infrastructure.

A compelling work of history, The Road Taken is also an urgent clarion call aimed at American citizens, politicians, and anyone with a vested interest in our economic well-being. Physical infrastructure in the United States is crumbling, and Petroski reveals the complex and challenging interplay between government and industry inherent in major infrastructure improvement. The road we take in the next decade toward rebuilding our aging infrastructure will in large part determine our future national prosperity.

Henry Petroski is the author of the acclaimed The Pencil and To Engineer is Human.

"A thorough account of how our highway system got to be what it is." —New York Review of Books

“A characteristically eye-opening look at America's infrastructure . . . Anyone with an interest in the way things work will want this book--and will doubtless emerge as a fan of the ever curious author.” —starred review, Kirkus Reviews

"[Petroski] excels at revealing the origins of everyday, utilitarian things. His previous books include histories of the toothpick and the pencil, and his latest contribution bristles with fascinating details about the elements of road design we often overlook." —Los Angeles Times

"Mr. Petroski . . . cherishes roads and bridges, and his book is a loving look at everything--materials, expertise, politics, money, culture--that goes into their creation and maintenance. It is also a passionate appeal to Americans to accept responsibility for keeping their infrastructure safe and viable. . . . A labor of love [by] a lucid writer." —Wall Street Journal

"[Petroski] has a clear eye, a mellifluous prose style and a knack for spicing deep research with personal anecdotes." —Washington Post

"This is vital reading." —Booklist

"Public infrastructure is often deemed interesting only to policy wonks, but Petroski . . . proves that he can make it accessible and fascinating for a wider readership . . . His book may well move readers to lobby their elected officials." —Publishers Weekly

"Petroski’s goal is to ask how, given the importance of the car to the US economy and mobility, federal and state governments have allowed the country’s infrastructure to reach crisis point. But he goes beyond hand wringing. With an engineer’s technical knowledge and a historian’s eye, he offers a nuanced argument about the political, financial and engineering calculus that contributes to failures." —Nature

"One of the clearest (and most entertaining) cases yet for why we must improve the network of roads, bridges, and highways we take for granted." —Science

"A compelling work of history written by a guy with a feeling for the humanities and the grit of a practical engineer. (Where did people like him go?) . . . This book is your entry into revitalizing where you live by bringing politicians to task." —The Buffalo News

"In The Road Taken: The History and Future of America’s Infrastructure, Henry Petroski, Duke professor of civil engineering and the reliably fascinating author of books about how stuff gets to be stuff, provides the backstory to the American system of roads, streets, interstates and highways. The book is never less than interesting and is often fascinating." —Raleigh News & Observer

"Petroski brings welcome exposure to processes that, like infrastructure itself, too often hide in plain sight."—New Yorker

"Timely and insightful . . . Petroski’s book offers a rare engineer’s perspective on a debate too often dominated by economists and politicians." - Foreign Affairs