The Gifts of Africa: How a Continent and Its People Changed the World (Hardcover) 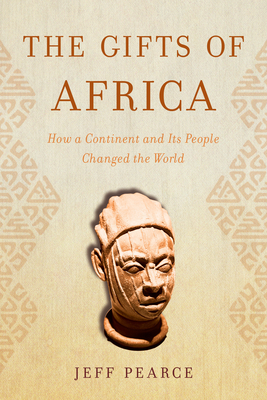 The Gifts of Africa: How a Continent and Its People Changed the World (Hardcover)


Not On Our Shelves—Ships in 1-5 Days
"The West will begin to understand Africa when it realizes it's not talking to a child--it's talking to its mother." So writes Jeff Pearce in the introduction to his fascinating, groundbreaking work, The Gifts of Africa: How a Continent and Its People Changed the World. We learn early on in school how Europe and Asia gave us important literature, science, and art, and how their nations changed the course of history. But what about Africa? There are plenty of books that detail its colonialism, corruption, famine, and war, but few that discuss the debt owed to African thinkers and innovators. In The Gifts of Africa, we meet Zera Yacob, an Ethiopian philosopher who developed the same critical approach and several of the same ideas as Ren Descartes. We consider how Somalis traded with China, and we meet the African warrior queens who still inspire national pride. We explore how Liberia's Edward Wilmot Blyden deeply influenced Marcus Garvey, and we sneak into the galleries and theaters of 1920s Paris, where African art and dance first began to make huge impacts on the world. Relying on meticulous research, Pearce brings to life a rich intellectual legacy and profiles modern innovators like acclaimed griot Papa Susso and renowned economist George Ayittey from Ghana. From the ancient Nubians to a Nigerian superstar in modern painting and sculpture, from the father of sociology in the Maghreb to how the Mau Mau in Kenya influenced Malcom X, The Gifts of Africa is bold, engaging, and takes the reader on a journey of thousands of years up to the present day. Past works have reinforced misconceptions about Africa, from its oral traditions and languages to its resistance to colonial powers. Other books have treated African achievements as a parade of honorable mentions and novelties. This book is different--refreshingly different. It tells the stories behind the milestones and provides insights into how great Africans thought, and how they passed along what they learned. Provocative and entertaining, The Gifts of Africa at last gives the continent its due, and it should change the way we learn about the interactions of cultures and how we teach the history of the world.
Jeff Pearce has traveled far to get his unusual and compelling stories. For his popular work of history, Prevail, he tracked down witnesses and survivors of the heroic struggle in Ethiopia against Fascist Italy. For his popular biography of adventurer Henry Layard, Winged Bull, he traveled across the Middle East and interviewed a Kurdish army commander near Mosul. He's investigated the dangerous realm of street gangs, and he's taught journalism in Myanmar. He has written novels, books on history and current affairs, and stage plays that have been performed in Toronto and Los Angeles.