Dr. Mary's Monkey: How the Unsolved Murder of a Doctor, a Secret Laboratory in New Orleans and Cancer-Causing Monkey Viruses Are Linked to Lee Harvey Oswald, the JFK Assassination and Emerging Global Epidemics (Paperback) 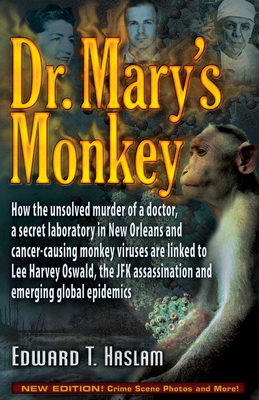 Dr. Mary's Monkey: How the Unsolved Murder of a Doctor, a Secret Laboratory in New Orleans and Cancer-Causing Monkey Viruses Are Linked to Lee Harvey Oswald, the JFK Assassination and Emerging Global Epidemics (Paperback)


Not On Our Shelves—Ships in 1-5 Days
Get ready for the “Hottest cold case in America!” This updated paperback contains the same content as the 2014 hard cover edition which has 25 additional pages of revelations added since the original 2007 paperback. These new pages include documents from the FBI, CIA, CDC, and NOPD, plus the actual crime scene photos from the 1964 murder of Dr. Mary Sherman. The bizarre death of this nationally known cancer researcher sets the stage for this gripping exposé of medical professionals enmeshed in covert government operations. Following a trail of police reports, FBI files, cancer statistics, and medical journals, this revealing book presents a web of secret-keeping which swept doctors into cover-ups of contaminated polio vaccines, cancer outbreaks, the arrival of the AIDS virus, and a deadly biological weapon tested on both monkeys and humans. Add Lee Harvey Oswald to the cast of this secret bio-weapon project, and this dark tale connects Oswald’s summer of secrets to the intrigue surrounding the assassination of President Kennedy.

Edward T. Haslam is a former advertising music director and writer. He lives in Bradenton, Florida. Jim Marrs is the author of Alien Agenda, Crossfire (which was consulted by Oliver Stone during the making of the movie JFK), and Rule by Secrecy. He is a member of the Society of Professional Journalists and Investigative Reporters & Editors and is a former president of the Press Club of Fort Worth. He lives in Fort Worth, Texas.