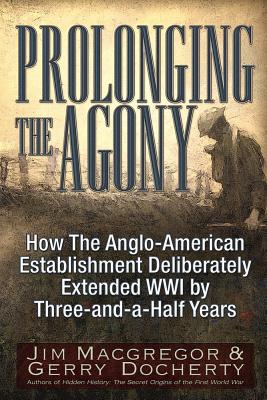 
Not On Our Shelves—Ships in 1-5 Days
The fact that governments lie is generally accepted today, but World War I was the first global conflict in which millions of young men were sacrificed for hidden causes. They did not die to save civilization; they were killed for profit and in the hopes of establishing a one-world government. By 1917, America had been thrust into the war by a President who promised to stay out of the conflict. But the real power behind the war consisted of the bankers, the financiers, and the politicians, referred to, in this book, as The Secret Elite. Scouring government papers on both sides of the Atlantic, memoirs that avoided the censor’s pen, speeches made in Congress and Parliament, major newspapers of the time, and other sources, Prolonging the Agony maintains that the war was deliberately and unnecessarily prolonged and that the gross lies ingrained in modern “histories” still circulate because governments refuse citizens the truth. Featured in this book are shocking accounts of the alleged Belgian “outrages,” the sinking of the Lusitania, the manipulation of votes for Herbert Hoover, Lord Kitchener’s death, and American and British zionists in cahoots with Rothschild's manipulated Balfour Declaration. The proof is here in a fully documented exposé—a real history of the world at war.
Jim Macgregor was raised in a cottage hospital for the War Disabled in Scotland. His conversations with the patients, many of whom had suffered terrible wounds, developed in him a lifelong interest in war and its victims. Gerry Docherty is the author of several historic plays. They are the authors of Hidden History: The Secret Origins of the First World War.
"The Best Book I have ever read about the causes of WW1" --Nick Kollerstrom, author of How Britain initiated both World Wars