The Undercurrents: A Story of Berlin (Paperback) 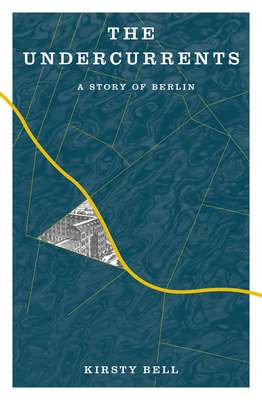 The Undercurrents: A Story of Berlin (Paperback)


On Our Shelves Now at:
Humane, thought provoking, and moving, this hybrid literary portrait of a place makes the case for radical close readings: of ourselves, our cities, and our histories.

The Undercurrents is a dazzling work of biography, memoir, and cultural criticism told from a precise vantage point: a stately nineteenth-century house on Berlin’s Landwehr Canal, a site at the center of great historical changes, but also smaller domestic ones. The view from this house offers a ringside seat onto the city’s theater of action. The building has stood on the banks of the canal since 1869, its feet in the West but looking East, right into the heart of a metropolis in the making, on a terrain inscribed indelibly with trauma.

When her marriage breaks down, Kirsty Bell—a British-American art critic, adrift in her midforties—becomes fixated on the history of her building and of her adoptive city. Taking the view from her apartment window as her starting point, she turns to the lives of the house’s various inhabitants, to accounts penned by Walter Benjamin, Rosa Luxemburg, and Gabriele Tergit, and to the female protagonists in the works of Theodor Fontane, Irmgard Keun, and Rainer Werner Fassbinder. A new cultural topography of Berlin emerges, one which taps into energetic undercurrents to recover untold or forgotten stories beneath the city’s familiar narratives.
Kirsty Bell is a British-American writer and art critic based in Berlin. She has published widely in magazines and journals including Tate Etc. and Art in America, and was contributing editor of frieze from 2011 to 2021. She was awarded a Warhol Foundation Grant for her book The Artist’s House, and her essays have appeared in more than seventy exhibition catalogues for major international museums and institutions such as the Whitney Museum of American Art, Stedelijk Museum Amsterdam, and Tate, UK.
“[A] deeply absorbing…highly original and atmospheric book…[Bell] ably guide[s] us on a poetic exploration of the layers and depths in this troubled, thrilling, world capital.” —New York Times Book Review

“With sleuthing interest and novelistic flair, Kirsty Bell’s The Undercurrents has ruptured familiar terrain…an associative thesis on the dangers of repression, from gargantuan acts of genocide to the comparatively subtle shames of familial collapse…An enchanting and sometimes disturbing symbolism runs through The Undercurrents, as Bell imaginatively weaves the city’s hard factuality with the emotional and physical experience of living in it.” —frieze

“With her extraordinary new book…Bell brilliantly shows us that not only is history all around us, but it is also something that we actively live alongside…Bell takes us on an enthralling tour of Berlin’s recent history.” —Buzz Magazine

“[Bell] mixes personal reflections with historical and literary research in her lively investigation of the city and its contemporary built environment.” —Exberliner

“From the first moment I heard Kirsty Bell read from her writing, I have yearned for the book she was then working on. And now here it is, perfect and perfectly balanced, a clear-eyed and beautifully written account about place, about consciousness. I treasure The Undercurrents, and so will you.” —Hilton Als, author of White Girls

“I read this watery, engrossing book in the bath, following along as Kirsty Bell’s reflective curiosity leads her onward along the Landwehr canal, in and out of the archives, novels, memoirs, and stories of her building and her neighborhood. Evocative and fascinating, The Undercurrents is a liquid psychogeography of Berlin that had me mulling over the psychic charge of place not only where Bell lives, but where I live too.” —Lauren Elkin, author of Flâneuse: Women Walk the City in Paris, New York, Tokyo, Venice, and London

“Kirsty Bell cracks Berlin open, revealing the city’s chaotic brine; one that is alive, ever moving, and deeply human.” —Calla Henkel, author of Other People’s Clothes

“It is easy to be carried along by these submerged currents, by the momentum of the prose, the motion through a resisting city. As in other classics of urban discovery, the personal becomes universal, and the past that demands to live in the present is revealed like a shining new reef. As we return, time and again, to the solitary figure at the window.” —Iain Sinclair, author of London Orbital

“Kirsty Bell has achieved a real work of art: She tells of Berlin’s sunken past as a freshly emerged present—and she explains the energy of this city from the history of the people, the streets, and the hopes that have shaped it.” —Florian Illies, author of 1913: The Year before the Storm

“With The Undercurrents, Kirsty Bell does for Berlin what Luc Sante has done for New York and Rebecca Solnit for San Francisco; she tells the stories recorded in the city’s stone and water, and in the hearts of its inhabitants. Her profound and idiosyncratic chronicle of Berlin is an act of hydromancy, divining a history of love and loss from the water that flows beneath and between the city’s bricks.” —Dan Fox, author of Limbo

“Kirsty Bell’s approach to Berlin, the mixing of the personal with the historical, is fascinating. I read her book with great interest and pleasure.” —Norman Ohler, author of Blitzed: Drugs in the Third Reich