Winning Independence: The Decisive Years of the Revolutionary War, 1778-1781 (Hardcover) 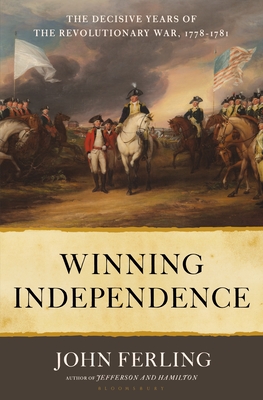 Winning Independence: The Decisive Years of the Revolutionary War, 1778-1781 (Hardcover)

From celebrated historian John Ferling, the underexplored history of the second half of the Revolutionary War, when, after years of ­fighting, American independence often seemed beyond reach.

It was 1778, and the recent American victory at Saratoga had netted the U.S a powerful ally in France. Many, including General George Washington, presumed France's entrance into the war meant independence was just around the corner.

Meanwhile, having lost an entire army at Saratoga, Great Britain pivoted to a “southern strategy.” The army would henceforth seek to regain its southern colonies, Virginia, North Carolina, South Carolina, and Georgia, a highly profitable segment of its pre-war American empire. Deep into 1780 Britain's new approach seemed headed for success as the U.S. economy collapsed and morale on the home front waned. By early 1781, Washington, and others, feared that France would drop out of the war if the Allies failed to score a decisive victory that year. Sir Henry Clinton, commander of Britain's army, thought “the rebellion is near its end.” Washington, who had been so optimistic in 1778, despaired: “I have almost ceased to hope.”

Winning Independence is the dramatic story of how and why Great Britain-so close to regaining several southern colonies and rendering the postwar United States a fatally weak nation ultimately failed to win the war. The book explores the choices and decisions made by Clinton and Washington, and others, that ultimately led the French and American allies to clinch the pivotal victory at Yorktown that at long last secured American independence.

John Ferling is Professor Emeritus of History at the State University of West Georgia. A leading authority on American Revolutionary history, he has appeared in many documentaries and has written numerous books, including Almost a Miracle: The American Victory in the War for Independence, Adams vs. Jefferson: The Tumultuous Election of 1800, The First of Men: A Life of George Washington, Setting the World Ablaze: Washington, Adams, and Jefferson in the American Revolution, and the award-winning A Leap in the Dark: The Struggle to Create the American Republic.

“Impeccably researched . . . the book is a must-read for any student of Revolutionary history. Yet another excellent work of early American history from one of its best practitioners.” —Kirkus Reviews

“Writing with his usual verve and imagination, Ferling demonstrates that the second half of the Revolutionary War possessed as much pathos, drama, and intrigue as the first part of the conflict. Winning Independence will undoubtedly appeal to both scholars and the general public. It's political and military history at its finest.” —Stephen R. Taaffe, author of WASHINGTON'S REVOLUTIONARY WAR GENERALS

“A mesmerizing historical adventure. Focusing on the southern campaigns of 1778-1781, Ferling luminously unravels the story of how the American colonists finally beat the odds and gained their independence from Great Britain. Certainly one of the most engaging books I've had the pleasure of reading in years.” —James Kirby Martin, author of the award winning BENEDICT ARNOLD, REVOLUTIONARY HERO

“Extraordinary. Ferling's observations on the rival commanders are genuinely thought-provoking and challenging. Deeply researched, impartial, and elegantly written, Winning Independence is nothing short of an instant classic-one of the truly essential works on America's founding struggle.” —Mark Edward Lender, author of CABAL! THE PLOT AGAINST GENERAL WASHINGTON

“Deeply researched and well-argued…Readers will gain fresh insight into how thin the line between victory and defeat was for both armies.” —Publishers Weekly

“Thoughtful…impressively researched…accessible and engaging… Ferling's lengthy, comprehensive, and essential work has staying power and should become one of the leading resources on the Revolutionary War.” —Library Journal (starred review)

Full of deep research and dramatic character portraits, a crowning achievement from one of the best historians of the period. —Christian Science Monitor