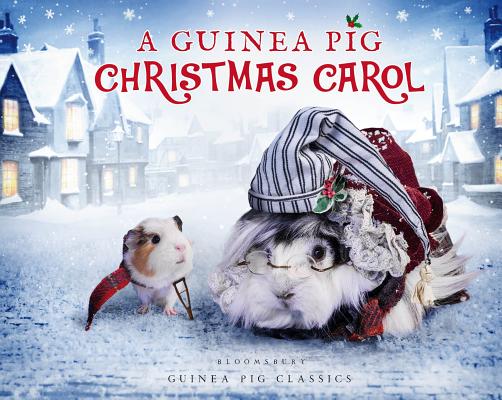 The ultimate and timeless Christmas story, with cuddly guinea pigs in the starring roles!

Miserable to the core and wholly unwilling to extend a paw to help those in desperate need, the miserly Ebenezer Scrooge says "bah, Humbug!" to the festive season. But one night he is visited by three Christmas Spirits who take him on a journey through time, so he can see the error of his ways and learn the true meaning of Christmas.

This is Charles Dickens's joyful Christmas tale, retold in an entirely new way.

Charles Dickens (1812-70) was an English writer, generally considered to be the greatest novelist of the Victorian period and responsible for some of English literature's most iconic novels and characters. He continues to be one of the best-known and most read of English authors, with multiple adaptations of his work frequently being produced.

Tess Newall is a set designer who specialises in fashion shoots and decorative painting. She carefully stitched and painted each tiny detail in A Guinea Pig Night Before Christmas, creating a small but perfectly formed vision of Christmas Eve in a guinea pigs's home.

“Like a comfortable armchair upon which you might read one of these tiny masterpieces, the success of the series--and let there be no doubt that it is a triumph--rests on four points: the iconic but charming literature upon which each book is based; the unwavering cuteness of the guinea pigs; the delightful styling of each photograph with costumes by Newall; the sparse brevity of Goodwin's adaptations that preserve the essence, the aesthetic, and the language of the original.” —Los Angeles Review of Books

“A sweet take on Shakespeare's tragic love story . . . Fully illustrated with guinea pigs in costumes worthy of The Globe Theatre in London, this book is definitely not one to miss.” —BookTrib on A GUINEA PIG ROMEO & JULIET

“We thought Pride & Prejudice couldn't get much better--then we saw lines from Jane Austen's classic novel paired with some seriously dapper rodents.” —EW.com, on A GUINEA PIG PRIDE & PREJUDICE

“This may be the definitive version of Pride and Prejudice. If they could get War and Peace down to this length, it would be a service to mankind.” —Salman Rushdie, on A GUINEA PIG PRIDE & PREJUDICE

“An entirely new, adorably hilarious take on the classic story . . . This affectionate, quietly dramatic homage is the perfect gift for Austen-philes, Austen-newbies, guinea-pig aficionados and anyone who appreciates a tale well told.” —BookPage, on A GUINEA PIG PRIDE & PREJUDICE