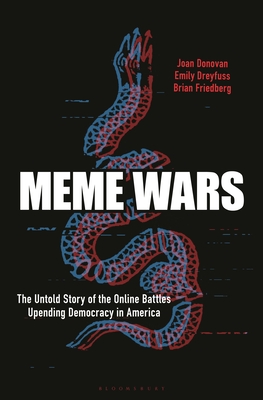 A groundbreaking investigation into the digital underworld, where far-right operatives wage wars against mainstream America, from a masterful trio of experts in media and tech.

Memes have long been dismissed as inside jokes with no political importance. Nothing could be further from the truth. Memes are bedrock to the strategy of conspiracists such as Alex Jones, provocateurs like Milo Yiannopoulos, white nationalists like Nick Fuentes, and tacticians like Roger Stone. While the media and most politicians struggle to harness the organizing power of the internet, the “redpill right” weaponizes memes, pushing conspiracy theories and disinformation into the mainstream to drag people down the rabbit hole. These meme wars stir strong emotions, deepen partisanship, and get people off their keyboards and into the streets--and the steps of the US Capitol.

Meme Wars is the first major account of how “Stop the Steal” went from online to real life, from the wires to the weeds. Leading media expert Joan Donovan, PhD, veteran tech journalist Emily Dreyfuss, and cultural ethnographer Brian Friedberg pull back the curtain on the digital war rooms in which a vast collection of antiesablishmentarians bond over hatred of liberal government and media. Together as a motley reactionary army, they use memes and social media to seek out new recruits, spread ideologies, and remake America according to their desires.

A political thriller with the substance of a rigorous history, Meme Wars is the astonishing story of how extremists are yanking our culture and politics to the right. And it's a warning that if we fail to recognize these powerful undercurrents, the great meme war for the soul of America will soon be won.

Joan Donovan, PhD, is the research director of Harvard Kennedy School's Shorenstein Center and one of the foremost experts on media and disinformation in the world.

Emily Dreyfuss is a journalist who covers the intersection of society and technology; her writing has appeared in WIRED, The Atlantic, and The New York Times, among other publications.

Brian Friedberg is an ethnographer at Harvard Kennedy School, who researches far-right and political communities online and published definitive Qanon explainers in WIRED and The Hill. Together, the authors work on Harvard Kennedy School's Technology and Social Change Research Project out of Cambridge, Massachusetts.

"A punchy exploration about how alt-right blogs and forums burst into real life and how an elementary form of propaganda evolved from distasteful humor to a political ideology. Best to leave on the shelf if you’re not into cursing." - Bloomberg

"Fascinating and frightening … [the authors'] in-depth, detailed and not-easily-dismissed thesis should be a must-read for anyone who is concerned about our future … It is also a testimonial to the immense power of images to shape and define the conversation in ways that are increasingly divorced from reason and rationality." - Bowling Green Daily News

"A convincing argument that the political right has successfully “meme-ified” their arguments, uniting supporters with messages that exclude outsiders, make followers fell smart and included, and simplify complex social issues in appealing ways … for readers curious about the roles played by social media personalities who exploited online ecosystems and fueled existing social divisions prior to the [January 6] attack, Meme Wars offers a great deal of insight." - Science

"A discomfiting investigative history of far-right-driven memetic warfare in the United States--a war many may not be aware is even being waged." - Globe & Mail

“Clear-eyed and persuasive, this is an alarming look at how internet culture has imperiled democracy.” —Publishers Weekly

“Meme Wars masterfully tells the story of how America got to be the way it is better than anything I've ever read. Even if you think you know everything about politics or online culture, trust me, you will learn something new. A thrilling, informative tale about our modern world that treats online influencers as the power brokers they literally are.” —Taylor Lorenz, The Washington Post

“Meme Wars unearths a history of the internet that otherwise would have remained buried forever. Analyzing the negative consequences of unchecked power, rapid growth, and the political adoption of social media by bad actors, the authors create a compelling case for redesigning global technologies to serve the public interest.” —Maria Ressa, founder of Rappler and winner of the 2021 Nobel Peace Prize

“Donovan, Dreyfuss, and Friedberg offer a lapidary analysis of the hate machine that has brought us addled insurrectionists, red-pilled extremists, and a generation of nihilists masquerading as political thinkers. An eye-
opening and disturbing read on where the infrastructure of disinformation is taking us.” —Katherine Stewart, author of THE POWER WORSHIPPERS

“An incisive look at the struggles and provocations that are shaping online discourse in the twenty-first century and hastening the corrosion of democracy in the United States.” —Edward Wong, diplomatic correspondent, The New York Times

“Anyone who cares about our politics, its discontents, and its outrages will be grateful to these three gifted and indefatigable researchers. They will shake up your sense of how political discourse works now with their tales built around the effects of the 'infrastructure and incentives' of the internet. 'Meme wars are culture wars, accelerated and intensified,' they write, and can do a number on 'patience, kindness, and understanding.' Friends of these virtues have a lot to learn about how to defend them, and Meme Wars is a great introductory class.” —E.J. Dionne Jr., author of OUR DIVIDED POLITICAL HEART and co-author of 100% DEMOCRACY