The Madness of Crowds: Gender, Race and Identity (Hardcover) 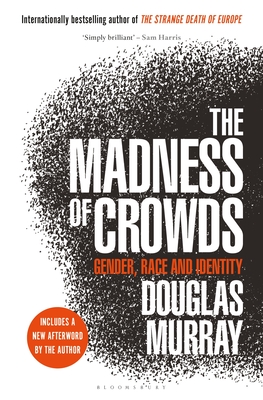 The Madness of Crowds: Gender, Race and Identity (Hardcover)

"An excellent take on the lunacy affecting much of the world today. Douglas is one of the bright lights that could lead us out of the darkness." – Joe Rogan

"Douglas Murray fights the good fight for freedom of speech ... A truthful look at today's most divisive issues" – Jordan B. Peterson

Are we living through the great derangement of our times?

In The Madness of Crowds Douglas Murray investigates the dangers of 'woke' culture and the rise of identity politics. In lively, razor-sharp prose he examines the most controversial issues of our moment: sexuality, gender, technology and race, with interludes on the Marxist foundations of 'wokeness', the impact of tech and how, in an increasingly online culture, we must relearn the ability to forgive.

One of the few writers who dares to counter the prevailing view and question the dramatic changes in our society – from gender reassignment for children to the impact of transgender rights on women – Murray's penetrating book clears a path of sanity through the fog of our modern predicament.

Douglas Murray is a regular columnist for both the Spectator and Standpoint and writes frequently for a variety of other publications, including the Sunday Times and Wall Street Journal. A prolific debater, Douglas has spoken on a variety of prominent platforms, including at the British and European Parliaments and the White House.

"Simply brilliant. Reading it to the end, I felt as though I’d just drawn my first full breath in years. At a moment of collective madness, there is nothing more refreshing--or, indeed, provocative--than sanity." - Sam Harris, author of five New York Times bestsellers and host of the Making Sense podcast

"Murray cuts through the doubt-sowing incoherence of social-justice babble to say — eloquently — what 95 per cent of us believe, but have been made fearful to say aloud. Read it." - Barbara Kay, National Post

"From the silly to the tragic, Murray covers the range of identititarian pathology without ever losing his cool. The result is a book that is less a political war cry than a map and compass to a strange world of shifting topographies and endless inconsistencies." - Abe Greenwald, Commentary

"Whether one agrees with him or not, Douglas Murray is one of the most important public intellectuals today." - Bernard-Henri Lévy

"Timely … Murray takes a stance that few dare to … With violence erupting in Europe and America's new anti-immigration policies, this audacious work will find its readers." - Kirkus Reviews, on The Strange Death of Europe

"An enthralling account of the rise of Islamism in Europe. It’s beautifully written and cogently argued." - Christina Hoff Sommers, Politico, on The Strange Death of Europe

"Excellent and disturbing." - Michael Barone, Washington Examiner, on The Strange Death of Europe

"[A] powerful new book." - National Review, on The Strange Death of Europe

"Murray’s clear and humane exposition of the seismic changes and the abject failure of political elites to face up to them gives those not willfully blind an opportunity to see." - American Thinker, on The Strange Death of Europe

"A fiery, lucid, and essential polemic." - Commentary, on The Strange Death of Europe

"Lively … Murray’s book is informed by actual reporting across the Continent, and a quality of writing that manages to be spritely and elegiac at the same time. Murray’s is also a truly liberal intellect, in that he is free from the power that taboo exerts over the European problem, but he doesn’t betray the slightest hint of atavism or mean-spiritedness." - National Review, on The Strange Death of Europe

"[A] startling, well-argued polemic." - The Federalist, on The Strange Death of Europe

"Douglas Murray has written what is probably the most important book of the last 50 years." - Townhall.com, on The Strange Death of Europe