A Method of Lighting the Stage 4th Edition (Hardcover) 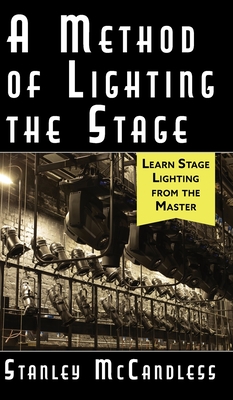 A Method of Lighting the Stage 4th Edition (Hardcover)

Stage lighting is an essential element of the theater experience. Giving visibility where and when it is wanted, proper lighting stimulates the wonder of being there. In brightness and darkness, color and pattern create an atmosphere of inherent drama, allowing new horizons for artistic expression.

Stanley McCandless was a Harvard-trained architect whose work and passion led him to become a pioneer in the field of theatrical lighting design. McCandless served amongst the first faculty at the Yale School of Drama, where he taught lighting design for almost 40 years. During his tenure at Yale he designed a system known as the McCandless Method, as outlined in A Method of Lighting the Stage, which is still widely used today.

There are four steps to the McCandless Method:

- Blending and Toning the Acting Areas

McCandless also designed specific house lights for the Center Theater in New York's Radio City, which were later developed into the ellipsoidal reflector spotlight. This lighting fixture has become the staple for theater lighting inventories in America. By enhancing all aspects of theatrical lighting, from the engineering of lighting instruments to designing realized theatrical productions, McCandless truly earned his moniker, "The father of modern lighting design."