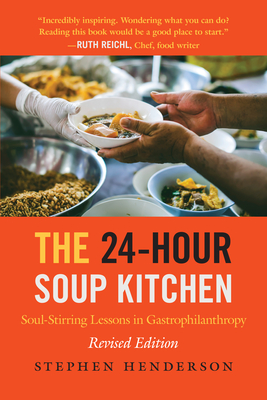 
Not On Our Shelves—Ships in 1-5 Days
It was when traveling on assignment in India that journalist Stephen Henderson first learned of soup kitchens operated by Sikh houses of worship (or gurudwaras). After volunteering for a week at the Gurudwara Bangla Sahib in Delhi--which feeds 20,000 men, women, and children every day--Henderson became curious to research global gastrophilanthropy, or the very different ways in which hungry people are served free meals around the world. When newspaper and magazine work dispatched him to places across America and abroad, Henderson would add days to his itineraries to learn about local customs of charitable cookery. This intriguing series of field reports reveals the clamor, chaos, and compassion of kitchens in places such as Iran, Israel, and South Korea, as well as those in Austin, Los Angeles and Pittsburgh. While the recipes, culinary methods, and clientele may vary, all the soul-stirring experiences share a common theme: a great way to show love to the needy is through the gift of food. Written with a huge heart, and an even bigger appetite, these chapters--sad and funny, sometimes both--may inspire you to embark on your own acts of gastrophilanthropy. Now released in paperback, Stephen Henderson's revised edition adds two new chapters reflecting on the COVID-19 pandemic and its effect on food insecurity and homelessness. His latest perspective demonstrates even further the necessity for all to step up in any way they can. After all, someone, somewhere, is always hungry.