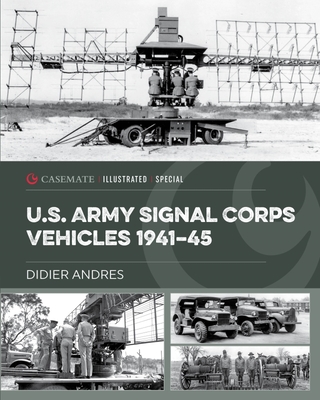 
Special Order—Subject to Availability
Includes hundreds of period photos covering all the details of the trucks, vans and trailers vital to maintain the communications of the U.S. Army in WWII.

The Signal Corps was at the forefront of the technological development of communications throughout World War II. Tasked with coordinating all American military activities, the Signal Corps initially had to rely on a communications landline network covering some 1 300 000 km. This network together with radio communications provided President Roosevelt with a global overview of military operations down to battalion level updated hourly for nearly five years.

Technological evolution was so rapid that radio communications soon took over from the landline network, however adaptation remained a priority within the US Army Signal Corps for when landline networks were unavailable or radio silence had to be observed; signallers also maintained older communications methods including homing pigeons.

Almost every large piece of Signal Corps equipment required wheeled transport. Early in the war the Model "K" vehicles, designed for the Signal Corps' needs, quickly proliferated with 84 variants being produced. After that designation was abandoned the Signal Corps would catalogue a further 62 models of vehicles and trailers, most of them were associated with a particular radio or radar installation. This comprehensive and fully illustrated account covers radar, radio vehicles, plus specialized vehicles such as telephone repair trucks, mobile telephone switchboards and homing pigeon units, all described in technical detail and illustrated by hundreds of period photos.