I Really Want to Fly to the Moon!: A Really Bird Story (Hardcover) 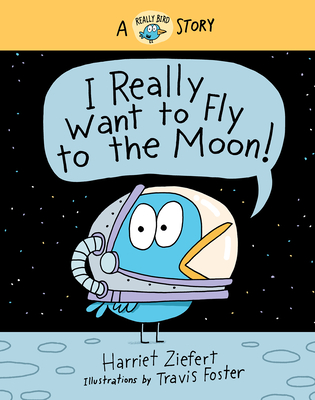 I Really Want to Fly to the Moon!: A Really Bird Story (Hardcover)

Take off with Really Bird and friends as they set their sights on a trip to outer space in this latest hilarious adventure.

Meet Really Bird, a small bird who lives in a large city park with his friends Cat, Pup, Mouse, and Rabbit. In each story, Really Bird finds himself really wanting something - to be bigger, to have his fair share, or to be the leader - to be really silly, funny, strong, cool, happy, or brave. And when he feels something, he really feels it.

Each story is an entertaining, character-driven caper based on relatable social/emotional themes, delivered with surprise twists, high drama, and expert comic timing. Along the way, lessons are learned about qualities such as teamwork and compassion. The emphasis is on character growth and development through creative problem-solving. Friendship and emotional engagement are at the heart of every story.

In I Really Want to Fly to the Moon Really Bird and his friends, Cat and Pup, decide to take a trip into space - destination Moon Along the way, they discover how patience, understanding, and teamwork can get them where they want to go.

Harriet Ziefert grew up in New Jersey, where she attended the local schools. She graduated from Smith College, then received a Master's degree in Education from New York University, where she was among the founding pioneers in the development and teaching of what today is known as the Common Core Curriculum. Since then, she has written more than 200 books.Ziefert's picture book A New Coat for Anna, illustrated by Anita Lobel, was chosen as one of 10 books to be read aloud by former First Lady Barbara Bush as part of a program promoting reading. In addition to her prolific picture-book writing, Ziefert has authored many innovative easy-to-read books, including Sleepy Dog, which has sold more than two million copies. Ziefert's relationship with illustrator Simms Taback yielded over a dozen books that have become modern classics.As the publisher of Blue Apple Books, Ziefert launched the award-winning Jump-Into-Chapters series, which includes Scribbles and Ink, now a WGBH televised series. As a packager, Ziefert delivered the Caldecott honor-winning There Was an Old Lady Who Swallowed a Fly. The mother of two and grandmother of five, Ziefert lives in the Berkshires of Massachusetts.Travis Foster, a graduate of the Ringling College of Art and Design in Sarasota, Florida, has been illustrating for more than 25 years. Kirkus Reviews praised his work in What's New at the Zoo? as "ingenious illustrations [that] feature antic cartoonish animals in an explosion of colors ...." His editorial and advertising clients include Target, Disney, Forbes, Internet Week, Aetna, The Wall Street Journal, and The Washington Post. Foster lives in Nashville, Tennessee, with his wife and four children.