Five Laterals and a Trombone: Cal, Stanford, and the Wildest Finish in College Football History (Hardcover) 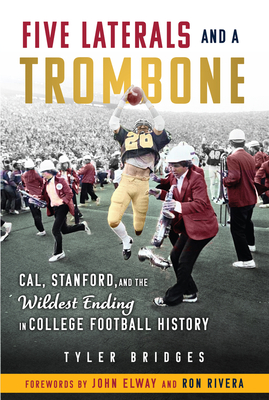 Five Laterals and a Trombone: Cal, Stanford, and the Wildest Finish in College Football History (Hardcover)


Special Order—Subject to Availability
The wildest finish ever to a college football game occurred when five laterals on the final kickoff ended with a sprint through the opposing team’s marching band—prematurely in celebration on the field—for the winning touchdown. It was 21 seconds of action so unfathomable it has become known simply as The Play.

Five Laterals and a Trombone captures the madcap story as it developed in November 1982, tracing the ups and downs, mood swings, and hijinks surrounding the 85th Big Game between the University of California at Berkeley and Stanford University.

Journalist Tyler Bridges has deftly reconstructed the pivotal moments and resulting lore thanks to hundreds of interviews with all the key figures on both sides of the rivalry, including players, coaches, referees, and stadium personnel. Among the memorable characters are Stanford star quarterback John Elway, Cal linebacker Ron Rivera, the final lateral receiver Kevin Moen, and the immortalized Cardinal trombone player Gary Tyrrell.

The Play was not televised live. There was no instant replay—let alone a viral video. In 1982, Steve Wozniak and Steve Jobs, who had founded Apple Computer Company in a garage only 10 miles from the Stanford campus, were just developing the first personal computers. It took hours for news of the rivalry game's outcome to spread across the country, yet football fans would remain enthralled by the bizarre sequence for decades to come.

Readers will be transported onto the field and inside the huddle in this definitive history of college football's ultimate oddity.
Tyler Bridges, twice a member of Pulitzer Prize-winning teams, is a journalist based in New Orleans who reports on Louisiana politics for The Advocate and has also written for the Washington Post, Politico Magazine, and other publications. He is the author of five books, was a 2011-12 Nieman Fellow at Harvard, was awarded Columbia University’s Maria Moors Cabot Award in 2010 for his 10 years of foreign reporting in South America, and was a Shorenstein Center Fellow at Harvard in the fall of 2017. He is a graduate of Stanford University.