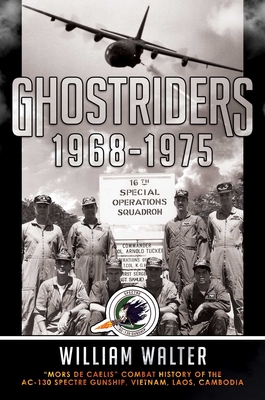 This is book number 1 in the Ghostriders series.

If necessity is the mother of invention, the AC-130 gunship was definitely her offspring.

Ghostriders: Mors De Caelis is a comprehensive history of AC-130 gunship combat operations in Vietnam, Laos, and Cambodia. The story begins with the first AC-130 in 1968, and ends in 1975 at the end of the war in Vietnam. It tells the life and death stories of Spectre crews, who faced extreme danger while hunting trucks on the Ho Chi Minh Trail and providing fire support for US and allied ground forces. Though the AC-130 was credited with 10,000 trucks destroyed, this phenomenal achievement came with a hefty price. Fifty-two Spectre crewmen and six AC-130s were lost during combat operations in Laos and Vietnam.

Written in third-person omniscient point of view by an experienced combat veteran and Spectre Historian, all aspects of the story are derived from official declassified records and personal interviews. The level of detail and context figuratively puts the reader in the aircraft as an observer, flying alongside a Spectre crew in combat. Above all, this is the story of Spectre—accurate, detailed, compelling, and unique.
Chief Master Sergeant William Walter served as an AC-130 Aerial Gunner from 1978 to 2005. He was inducted into the Air Commando Hall of Fame in 2001 and the USSOCOM Hall of Honor in 2011.