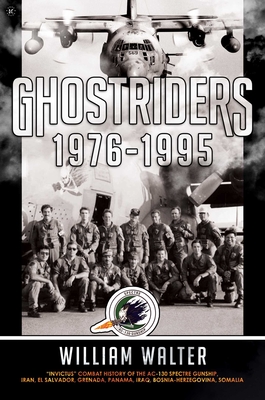 This is book number 2 in the Ghostriders series.

Resistance is futile. You can run, but you’ll only die tired.

The AC-130 Gunship was quickly developed in 1968 to provide fire support for ground forces in Vietnam. Twenty-eight C-130 cargo aircraft were converted into AC-130s for night attack operations. The AC-130 was crude, ugly, ad hoc, and detested by many within the USAF…but it worked, and it worked well. Likewise, AC-130 crews were deemed unruly “biker gangs,” but performed magnificently in every major US military operation from 1976 to 1995. Most of these combat operations were cloaked in secrecy, but records once classified for up to twenty years have now been opened. Based on this newly declassified information and hundreds of interviews with SOF veterans, Ghostriders 1976-1995 is the first authoritative historical account of the AC-130 operations, written by an AC-130 Aerial Gunner who participated in every AC-130 combat operation from 1980 through 1994.
Chief Master Sergeant William Walter served as an AC-130 Aerial Gunner from 1978 to 2005. He was inducted into the Air Commando Hall of Fame in 2001 and the USSOCOM Hall of Honor in 2011.