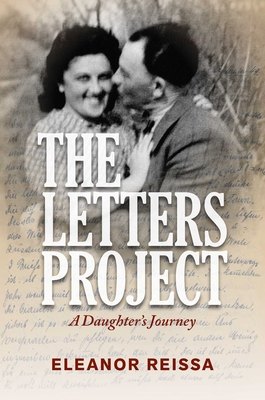 
On Our Shelves Now at:
The Letters Project is about big history, the Holocaust, but it is also an extraordinarily intimate personal narrative—a rare blend of informative, poignant, excruciating, startling, humorous, and ultimately inspiring storytelling.

In 1986, when her mother died at the age of sixty-four, Eleanor Reissa went through all of her belongings. In the back of her mother’s lingerie drawer, she found an old leather purse. Inside that purse was a large wad of folded papers. They were letters. Fifty-six of them. In German. Written in 1949. Letters from her father to her mother, when they were courting. Just four years earlier, he had fought to stay alive in Auschwitz and on the Death March while she had spent the war years suffering in Uzbekistan. Thirty years later, Eleanor—a theatre artist who has been on the forefront of keeping Yiddish alive—finally had the letters translated. The particulars of those letters send her off on an unimaginable adventure into the past, forever changing her and anyone who reads this book.

“‘The Holocaust,’ Eleanor Reissa writes in this unforgettable and courageous book, ‘is attached to me like my skin and I would be formless without it.’ A very personal story that is also a fundamental one of a woman trying to make sense of her life and family and of the shadows that go back before she was born. There is plenty of feeling and sentiment but it never feels sentimental. Her inimitable wit leavens the sadder scenes. This journey of discovery is riveting, told with tender insight, at times heartbreaking and at times heartwarming just like the Yiddish songs that have delighted Ms. Reissa’s audiences.” —Joseph Berger is a New York Times reporter and author of Displaced Persons: Growing Up American After the Holocaust

“Among the great number of personal takes on the Holocaust, Eleanor Reissa’s book really stands out, both for its intelligence and courage and for the unique way she braids the inter-generational stories together. In this brutal, poignant, and searingly honest book, Reissa simultaneously pieces together the unfathomable story of her Holocaust survivor father, reckons with the guilt she came to feel as his uncomprehending American daughter, and manages somehow to find insight and purpose in the ashes. This extraordinary account of two parallel journeys will stick with anyone privileged enough to read it.” —David Margolick, a former reporter for The New York Times, author of several books, including, most recently, The Promise and the Dream: The Untold Story of Martin Luther King, Jr. And Robert F. Kennedy

“The Letters Project is a wonderful book—funny, heartbreaking, and ultimately transcendent. Eleanor Reissa’s journey back into her family’s past makes for a gripping—and very human—international mystery. I highly recommend it.” —Tony Phelan, TV Showrunner for: Grey’s Anatomy, Doubt, and Council of Dads

“Eleanor Reissa has written a gritty, fearless yet funny memoir about herself, her family, and the Holocaust. Once I began reading it, I was completely swept away until the journey ended. I was moved by the power of this uniquely personal yet universal story.” —Julian Schlossberg is an American motion pictures, theatre, and television producer
Eleanor Reissa is Brooklyn born and bred, and attended public schools from kindergarten through college. She is a Tony-nominated director, a Broadway and television actress, a prize-winning playwright, a former artistic director of the world’s oldest Yiddish theater, and a singer who has performed in every major venue in New York City and in festivals around the world. She is a storyteller in English and Yiddish and is the daughter of parents who were Holocaust fighters.
"The Letters Project is fast-paced and mysterious and reads like a great detective story. The past seems to happen in real time right before the readers’ eyes. Reissa is a master storyteller, tracking down leads and clues, in search of the truth about her identity, which is bound up in the world her family inhabited before she knew them."
— The Rogovoy Report