Actively Unwoke: The Ultimate Guide for Fighting Back Against the Woke Insanity in Your Life (Hardcover) 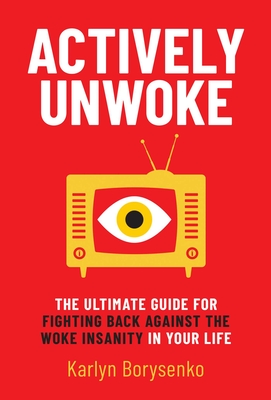 Actively Unwoke: The Ultimate Guide for Fighting Back Against the Woke Insanity in Your Life (Hardcover)


Not On Our Shelves—Ships in 1-5 Days
The woke have taken over every major institution in this country—the schools and universities, corporate America, the media, and the government. It’s time to fight back. Actively Unwoke will show you how.

For the last several years, we’ve watched as woke political activists have staged destructive protests, destroyed businesses, hurled accusations of racism and white supremacy around as if those terms mean nothing, and publicly bullied and canceled anyone who disagrees with them.

These authoritarians claim to represent social justice, but they are about one thing: power. Their goal is nothing short of cultural revolution. So what do we do about it?

Actively Unwoke explains what’s going on and decodes the language the woke are using so that you can understand what we’re up against.

To inspire you and explore actionable strategies you can take, Karlyn Borysenko looks at ways real people have fought back in the real world. This includes fighting back in the schools, knowing how to act when the woke come to work, taking a stand with your elected leaders, and even a few subversive strategies just for fun.

This book also reveals how to survive cancelation (yes, it’s possible) and how to take care of yourself as you join a ragtag group of misfits to do battle with the greatest existential threat of our time.

If you ever wondered what you would have done during the Civil Rights movement or in 1930s Germany, the answer to that question lies in what you are doing now. This fight isn’t about left or right, Democrat or Republican. It’s not about liberal values or conservative values.

This book will give you everything you need to join the unwoke army. It’s not enough to just be unwoke anymore—it’s time to be actively unwoke.
Karlyn Borysenko is an organizational psychologist turned unwoke activist. After earning an MBA and a PhD in psychology, and building her own respectable business helping organizations create great work experiences, Karlyn encountered the woke when they took over her online knitting community. She accidentally went viral for an article about being a decades-long Democrat who went to a Donald Trump rally before touring with the #WalkAway campaign leading up to the 2020 election.

These days, Karlyn spends her time creating content and providing support to help average people fight back against the woke in their lives. She broke one of the biggest woke stories of all time—the Coca Cola “Be Less White” training—and continues to provide commentary on this existential threat on her YouTube and Locals. She lives in the free state of New Hampshire with her husband Victor and their two dogs. You can find her at drkarlyn.com.
“Karlyn Borysenko has been on the front lines of the fight against critical race theory from the very beginning. In Actively Unwoke, she brings together her experience as an organizational psychologist and as a fierce on-the-ground activist, exposing the myths underpinning woke politics and providing a pathway to defeating it. This book sets down another marker in the culture wars: wokeness is poison and, Borysenko argues, must be relegated to the dustbin of history.”
— Chris Rufo, the leader in the fight against critical race theory

“Karlyn has been to the dark places that cancellation can take a person, and gained great wisdom from it. Her book will let you know what to expect when your workplace or social circle loses its collective mind, and will give you the mindset you need to keep your head and stand tall. It's a goldmine packed with stories of those who fought back, and strategies you can use to fight back yourself.”
— Paul Rossi, whistleblower exposing woke ideology in schools

“In a market saturated with analytic critiques on Wokeness, Dr. Karlyn Borysenko offers something refreshingly original. Actively Unwoke is the intersection of The Art of War, Freud, and James Lindsay. It is a meditative battle tome for fighting Wokeness where it is most intrusive: our personal lives. I sorely wish this book had been available before my anti-Woke crusade in my school district. Dr. Borysenko’s psychological expertise provides the structures and supports necessary to build the inner strength and harness the resiliency required to slay the Woke dragon unscathed. I highly recommend Actively Unwoke to all those that have had enough and are ready to fight but need a comprehensive and psychologically-integrative strategy to do so.”
— Frank McCormick, Chalkboard Heresy, whistleblower exposing critical race theory in schools

“Karlyn Borysenko is a fearless warrior fighting a battle on two ideological fronts. She will challenge your worldview, partisanship notwithstanding. In an age where so many are trapped inside of their own political echo chambers, hers is a much-needed voice of reason and intellectual accountability.”
— Eric Matheny, cohost of Bob & Eric Save America

“Timely, relevant, insightful, lifesaving! In an upside-down inside-out world, Dr. Karlyn Borysenko has done a service to humanity and sensibility by writing this book. A must read…for these times and all times.”
— Howard Asher, psychotherapist and author of "A Loose Grip"

“In this honest and compelling book, knitting psychologist turned anti-woke superhero Karlyn Borysenko manages to do what so many have failed to do; she breaks down into plain, easy-to-understand language what ‘woke’ is. Highly recommended for anyone who has ever wondered what is all the fuss about Critical Race Theory and why it is so imperative to take action now to stop its ever-expanding encroachment into almost every area of our culture: government, schools, workplaces, sports, and religious institutions. If you value honesty, integrity, and freedom, then you need to read this book!”
— Jodi Shaw, whistleblower exposing woke discriminatory practices at Smith College