This Was CNN: How Sex, Lies, and Spies Undid the World's Worst News Network (Hardcover) 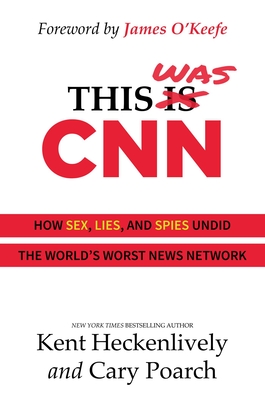 This Was CNN: How Sex, Lies, and Spies Undid the World's Worst News Network (Hardcover)


Coming Soon—Pre-Order Now
A CNN insider reveals what he saw behind the scenes at the cable news giant and the investigation that revealed even more shocking secrets.

Cary Poarch started working at CNN in the summer of 2017 as a die-hard Bernie Sanders supporter. But on his first location shoot during the Charlottesville riots, he quickly became disillusioned with how the network created the “fine people” hoax.

This began a political odyssey as he documented numerous incidents of outright bias, eventually leading him to contact James O’Keefe of Project Veritas. For months, Cary Poarch documented CNN’s rampant political bias for Project Veritas, and saw how the network was dividing the country. When the story was released by Project Veritas, it was seen by millions.

This book continues his investigation and uncovers even more shocking information about the behavior of network personnel, CNN’s ties to the Biden White House, CNN’s creation of a terrifying digital warfare capacity, and the possible penetration of CNN by our own intelligence agencies.

Cary partnered with two time New York Times bestselling author, Kent Heckenlively, and together they uncovered even more shocking secrets about “the most trusted name in news.
Kent Heckenlively is an attorney, science teacher, and New York Times bestselling author. During his time at Saint Mary’s College, Heckenlively worked for US Senator Pete Wilson, and was the school’s Rhodes Scholar candidate. At Golden Gate University Law School, he was a writer and editor of the school’s law review, and spent his summers working for the US Attorney’s Office in San Francisco. Kent and his wife, Linda, live in Northern California and have two children, Jacqueline and Ben.

Cary Poarch spent a combined thirteen years (Active duty and Reserves) in the US Navy in the Civil Engineer Corps as a construction electrician (SeaBees). Upon discharging from the Navy, he took a satellite uplink technician contractor position at CNN’s Washington, D.C., bureau. While working there, he discovered his passion for journalism?true journalism. Upon seeing blatant bias, he approached James O’Keefe with Project Veritas to discuss what could be done to show the world said biases. After being fired for his story release in October 2019, he and his family moved to Florida, where they still reside. Cary is now an investigative journalist for Project Veritas. If you see something you wish to expose, please reach out to Project Veritas at vertiastips@protonmail.com.

James E. O’Keefe III is the author of American Pravda and NYT bestseller Breakthrough. At nineteen, he started a newspaper at Rutgers. Five years later, he conducted an undercover investigation, financed with nothing but a credit card, that led to the congressional defunding of ACORN. Jailed in Louisiana and restricted for three years by federal prosecutors who later resigned for misconduct, he founded Project Veritas by shipping hidden cameras to citizen reporters and whistleblowers. A decade of a new genre of guerilla video journalism ignited a movement with the tagline: “Be Brave, Do Something.”

Along the way, O’Keefe has exposed big tech abuses, media malfeasance, and state and federal election violations leading to scores of resignation and arrests. His work has also led to enhanced voter integrity, new state legislation, and courtroom First Amendment triumphs—including a 2021 defamation lawsuit victory against The New York Times. Growing up in northern New Jersey, O’Keefe did property maintenance work every weekend with his father and grandfather, Jim O’Keefe Jr. and Jim O’Keefe Sr., and earned his Eagle Scout award on the side. He lives on the Long Island Sound, where he sails The Lucky Charm III.
“Heckenlively and Poarch do a deep dive into the cable news giant, revealing not just the bias against conservatives, but the terrifying possibility that they are preparing cyber warfare against their enemies, as well as being controlled by our intelligence agencies. Maybe we’ve been getting it wrong by calling it “fake news.” Maybe we should be calling it “spook news.”
— Zach Vorhies, Google whistleblower, author, and Founder of Blastvideo.com

“Heckenlively and Poarch do a deep dive into the cable news giant, revealing an obvious and hysterical bias against conservatives, and the nightmare possibilities of mounting cyber warfare and control by our intelligence agencies. An important book!”
— Eric Metaxas, #1 New York Times bestselling author and nationally syndicated radio host

“To state the obvious, CNN is far from the ‘most trusted name in news.’ That tag-line was adopted after the network’s meteoric rise in the 1980s as the go-to network for on-the-spot reporting of breaking news and programming featuring lively debates from differing points of view. What happened? How did it become one of the least trusted names in news? Finally, we can learn the answer. It is all here in This Was CNN. Everyone interested in understanding the demise of mainstream American media as sources of truth should read it.”
— Dennis Prager is the co-founder of Prager University, a nationally syndicated radio talk show host and author of ten bestselling books, including most recently, the third of his five-volume commentary on the fir

“This book may be about CNN, but its most shocking revelations have to do with the national security apparatus and its suffocating stranglehold on our government and our free press, through the use of social media companies and also through strategically embedded intelligence operatives.”
— Ryan Hartwig, Facebook Whistleblower

“Kent Heckenlively and Cary Poarch expose the dark underbelly of CNN, with the shocking truth that describes a fall from grace since the stellar days of the 1980s and 1990s and the abandonment of the noble goals espoused by founder Ted Turner. This book describes the death spiral of Turner’s grand dream, caused by Jeff Zucker’s violation of basic standards of journalism, shadowy relationships with intelligence agencies and an undeclared war on conservative politics. A must read.”
— Max Swafford, Author, Editor