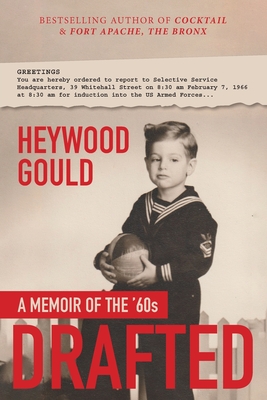 It's 1966, and young Heywood Gould, a Brooklyn boy with literary ambitions, has his dream job. He is a reporter at the ultra liberal (that's right liberal) New York Post, alongside young writers like Nora Ephron, Pete Hamill and Anthony Scaduto. New York is a newspaper town, six dailies trying to beat each other to the big story. He revels in the action and competition.

It's one of the most consequential moments in American history. Gould chases stories about the civil rights struggle, the anti-war movement, riots and rat infestation and World's Fair scandals. He covers everything from toy shows to murder trials. This is the best training for an apprentice writer.

Then he gets that fateful letter that begins, "Greetings." After five years of dodging, Uncle Sam has caught up with him. He's been caught in the Vietnam draft.

Now he is torn between his hatred of the war and his loyalty to his intensely patriotic family, Jewish immigrants who credit America with saving their lives, all of whom served in World War II.

In this comic memoir of his early life, screenwriter, director and novelist Gould cuts back and forth between vivd scenes of childhood as early as age 2, and coming of age in New York City in the '60's. Fighting anti-Semitic bullies in the neighborhood. Collecting corpses for a Brooklyn funeral home. Dropping acid in Greenwich Village and dropping out of college for a year of sleazy encounters and one bittersweeet love affair in the down and out world of left bank Paris.

He tell of the strategies he employed as his draft day approached. Shrink's notes, urine switches, bogus arrests, arranged marriages, freakouts at the physical-all to no avail.

Possessed of uncanny recall for details, an unparalleled ear for dialogue, and disarming candor about his foibles, young Heywood is great company. Reader will be treated to a ride to another era, not so terribly long ago.