Inside the Hotel Rwanda: The Surprising True Story ... and Why It Matters Today (Paperback) 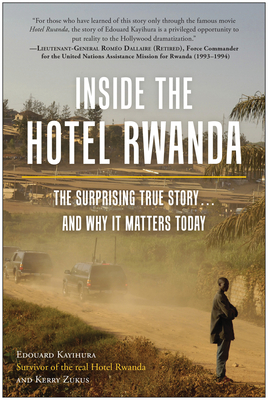 Inside the Hotel Rwanda: The Surprising True Story ... and Why It Matters Today (Paperback)


In Stock—Click for Locations
In 2004, the Academy Award–nominated movie Hotel Rwanda lionized hotel manager Paul Rusesabagina for single-handedly saving the lives of all who sought refuge in the Hotel des Milles Collines during Rwanda's genocide against the Tutsi in 1994. Because of the film, the real-life Rusesabagina has been compared to Oskar Schindler, but unbeknownst to the public, the hotel's refugees don't endorse Rusesabagina's version of the events.

In the wake of Hotel Rwanda's international success, Rusesabagina is one of the most well-known Rwandans and now the smiling face of the very Hutu Power groups who drove the genocide. He is accused by the Rwandan prosecutor general of being a genocide negationist and funding the terrorist group Democratic Forces for the Liberation of Rwanda (FDLR).

In Inside the Hotel Rwanda, survivor Edouard Kayihura tells his own personal story of what life was really like during those harrowing 100 days within the walls of that infamous hotel and offers the testimonies of others who survived there, from Hutu and Tutsi to UN peacekeepers. Kayihura tells of his life in a divided society and his journey to the place he believed would be safe from slaughter.

Inside the Hotel Rwanda exposes Paul Rusesabagina as a profiteering, politically ambitious Hutu Power sympathizer who extorted money from those who sought refuge, threatening to send those who did not pay to the genocidaires, despite pleas from the hotel's corporate ownership to stop.

Inside the Hotel Rwanda is at once a memoir, a critical deconstruction of a heralded Hollywood movie alleged to be factual, and a political analysis aimed at exposing a falsely created hero using his fame to be a political force, spouting the same ethnic apartheid that caused the genocide two decades ago.
Edouard Kayihura is a human rights activist and survivor of the genocide against the Tutsi in Rwanda, during which, he spent 100 days as a refugee in the Hotel des Mille Collines a.k.a. "Hotel Rwanda." Before he moved to the United States, he was the prosecutor in charge of the department of the prosecutions of the genocide crime and crimes against humanity before the Tribunal of the First Instance of Kigali. He was also executive secretary and legal representative of Kanyarwanda Human Rights. He speaks at different schools and universities in the states about his experience; Transitional Justice and Reconciliation; and Genocide denial. He is the member of the International Association of Genocide Scholars.

Kerry Zukus's debut novel, The Fourth House, was a Featured Selection of the Book of the Month Club®, the Doubleday Book Club©, and the Literary Guild©, divisions of Random House/Doubleday Entertainment, where it sold out its first two printings. The Fourth House had previously been named a finalist for the prestigious James Jones Award, annually given to the best first novel by an American author.

Zukus has worked invisibly behind the scenes for years, ghostwriting numerous books in a wide variety of genres. Zukus' short stories, essays and articles have graced a variety of magazines and periodicals. His plays have appeared at theatres across the country.
"This book offers a window into the real life experience of those who hid in the Hotel des Mille Collines during the 100 days of the genocide. For those who have learned of this story only through the famous movie Hotel Rwanda, the story of Edouard Kayihura is a privileged opportunity to put reality to the Hollywood dramatization."
—Lieutenant-General Roméo Dallaire (Retired) Force Commander of the United Nations peacekeeping force for Rwanda between 1993 and 1994, founder of The Roméo Dallaire Child Soldiers Initiative, Senior Fellow at the Montreal Institute for Genocide and Human Rights Studies, and Co-Director of the Will to Intervene Project

"I would like to thank the authors of the book Inside the Hotel Rwanda: The Surprising True Story...and Why It Matters Today for providing an honest account of the daily challenges experienced inside the Hotel Mille Collines during the Genocide Against the Tutsi. It stands apart from the tales of those who have abused, manipulated, and diverted public attention and opinion from what has been endured."
—Bernard Makuza, Vice-President of the Rwandan Senate, former Rwandan Prime Minister, and Rwanda's former ambassador to Germany and Burundi

"Historical truth is a slippery thing—even more so when the mass media is involved. The story of ‘Hotel Rwanda' is complex and fascinating. This book adds new depth to our understanding of the Rwandan genocide and the episode that has become its best known symbol."
—Stephen Kinzer, award-winning foreign correspondent, author: A Thousand Hills: Rwanda's Rebirth and the Man Who Dreamed It, teacher of journalism, Brown University

"Everyone who saw the movie Hotel Rwanda MUST read this book in which true survivors tell their story. While the movie indisputably raised awareness of genocide against Rwandan Tutsi, its distortion of facts created one of the most virulent platforms championing trivialization of that tragedy through theories of double genocide and related tactics."
—Egide Karuranga, PhD, professor at the Laval University School of Business in Quebec; President of Rwandan Diaspora of Canada, and genocide survivor from the Hotel des Mille Collines

"I will never forget the eight days my family and I spent in hiding at Hotel des Milles Collines. I was only 13 at the time, but I remember like it was yesterday. Twenty years later, it's important that we continue to acknowledge and commemorate the events that took place during those 100 days through stories such as those captured in Inside the Hotel Rwanda."
—Ashish J. Thakkar, Africa's youngest billionaire, Founder of Mara Group and Mara Foundation, a nonprofit social enterprise that focuses on emerging African entrepreneurs

"Inside the Hotel Rwanda reveals the real story of the events at the Hotel Mille Collines during the genocide in Rwanda. It exposes the untruths and inaccuracies of the Hollywood depiction of the exploits of Paul Rusesabagina. It lays bare how Rusesabagina has been able to fuel his own dangerous political ambitions as a result of the twisted facts of the film. Inside the Hotel Rwanda is important for finally setting the record straight, and doing so authoritatively from the perspective of a survivor of the events."
—David Russell, former Director of Survivors Fund (SURF), and Founder of The Social Enterprise

"Inside the Hotel Rwanda: What Really Happened and Why It Matters Today is a gripping first-person testimony of life inside the famous hotel that served as a sanctuary for over 1,000 souls during the 1994 Rwandan genocide. The author artfully blends his personal memoir with a cri de Coeur for the future of his nation. It provides a beacon of light for those seeking to eradicate genocide around the world."
–Melanie Tomsons, Executive Director and CCO of Never Again International-Canada

"For more than a decade, the film Hotel Rwanda has come to define a particular story and understanding of Rwanda. In this heartfelt work, Kayihura provides a moving tale from within that hotel, and seeks to set the record straight on the events there and since. For all craving authenticity about that horrific time, this is essential reading."
–Josh Ruxin, PhD, Truman Scholar, Fulbright Scholar, Marshall Scholar, and author of A Thousand Hills to Heaven: Love, Hope and a Restaurant in Rwanda

"I thank the author for this genuine and true recount of the daily fears and threats, hopes and despair, joys and sufferings experienced by refugees in the Hotel des Milles Collines. Edouard is presenting with humility and a heart-breaking accuracy the reality of what happened in the hotel, unlike those who abused, misused, manipulated, and diverted the world opinion with a far-fetched story for their own interests, fame, and self-aggrandizing agenda."
—Gasamagera Wellars, Director General of Rwanda Management Institute and former Rwandan Senator

"Edouard Kayihura's memoir about the actual events inside the famed ‘Hotel Rwanda' serves as multifaceted rejoinder to the mythology that emerged from Hollywood's fictionalized version of the 1994 genocide. If you want to become a better-informed global citizen and go beyond glossy feel-good images, read Kayihura's account of how twisting a story can spiral into a maelstrom of deception and divisiveness."
—Gerise Herndon, PhD, Director of Gender Studies and English professor at Nebraska Wesleyan University

"This is a serious and well-written reappraisal of the events at ‘Hotel Rwanda' in 1994. Kayihura's survivor account demonstrates the gulf between media portrayals and reality, and shows how myth-making has done nothing to resolve the polarity of perceptions of the genocide."
—David Whitehouse, author of In Search of Rwanda's Génocidaires: French Justice and the Lost Decades

"A chilling account by a Rwandan who was targeted by name and narrowly escaped death during Rwanda's time of genocide, his desperate flight seeking safety into the real ‘Hotel Rwanda,' and his first-hand report on who really kept him and the other refugees in the hotel from being slaughtered."
—John Quigley, LL.B. Harvard University, President's Club Professor Emeritus of Law at Moritz College of Law, Ohio State University

"Like The Diary of Anne Frank, this book provides a glimpse into the day-to-day life of people combating the insanity of genocide. The book is above all a story of humanity in the midst of an insane genocide. In the end, there are no heroes; there are only people willing to take a risk for the sake of humanity."
—Amy Shuman, PhD, professor at Ohio State University