Wisdom From Proverbs: For My Children And Grandchildren (Hardcover) 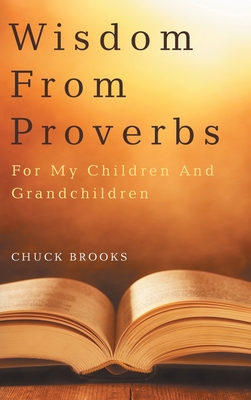 Wisdom From Proverbs: For My Children And Grandchildren (Hardcover)

Chuck Brooks was raised by a single mom in the "hood" of Baltimore City, Maryland. His mom introduced him to stories found in the Bible, which began to open in his heart a curiosity to the God who "created the heavens and the earth" (Genesis 1:1). He trusted the Lord at the age of eighteen, married Debbie at the age of twenty-two, and answered the Lord's call to preach at twenty-four. Over time, the Bible began to renew his mind, and in his mid-thirties, he answered the call to plant a church in Baltimore.

Chuck and Debbie have eight children, and most were homeschooled over a period of thirty years.

This devotional book based on the thirty-one chapters of Proverbs started as a "legacy gift" to his children, grandchildren, and great-grandchildren. But the more Chuck's family and friends read its manuscript, the more encouragement he received to make it available for all to read and be daily encouraged by the wisdom found in its pages.