Mathematical Intelligence: A Story of Human Superiority Over Machines (Hardcover) 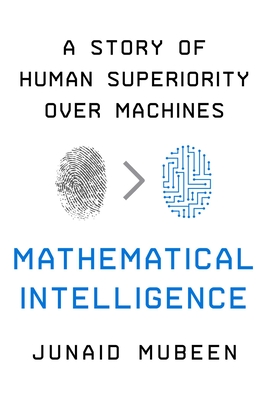 Mathematical Intelligence: A Story of Human Superiority Over Machines (Hardcover)


On Our Shelves Now at:
A fresh exploration into the 'human nature versus technology’ argument, revealing an unexpected advantage that humans have over our future robot masters: we’re actually good at mathematics.

There’s so much discussion about the threat posed by intelligent machines that it sometimes seems as though we should simply surrender to our robot overlords now. But Junaid Mubeen isn’t ready to throw in the towel just yet.

As far as he is concerned, we have the creative edge over computers, because of a remarkable system of thought that humans have developed over the millennia. It’s familiar to us all, but often badly taught in schools and misrepresented in popular discourse—math.

Computers are, of course, brilliant at totting up sums, pattern-seeking, and performing mindless tasks of, well, computation. For all things calculation, machines reign supreme. But Junaid identifies seven areas of intelligence where humans can retain a crucial edge. And in exploring these areas, he opens up a fascinating world where we can develop our uniquely human mathematical talents.

Just a few of the fascinating subjects covered in MATHEMATICAL INTELLIGENCE include:

-Humans are endowed with a natural sense of numbers that is based on approximation rather than precise calculation. Our in-built estimation skills complement the precision of computers. Interpreting the real world depends on both.

-What sets humans apart from other animals is language and abstraction. We have an extraordinary ability to create powerful representations of knowledge— more diverse than the binary language of computers.

-Mathematics confers the most robust, logical framework for establishing permanent truths. Reasoning shields us from the dubious claims of pure pattern-recognition systems.

-All mathematical truths are derived from a starting set of assumptions, or axioms. Unlike computers, humans have the freedom to break free of convention and examine the logical consequences of our choices. Mathematics rewards our imagination with fascinating and, on occasion, applicable concepts that originate from breaking the rules.

-Computers can be tasked to solve a range of problems, but which problems are worth the effort? Questioning is as vital to our repertoire of thinking skills as problem-solving itself.
After a decade of working on innovative learning technologies, Junaid Mubeen now develops virtual math initiatives for students from disadvantaged backgrounds. He has a DPhil in Mathematics from Oxford University and a Masters in Education from Harvard University, where he studied as a Kennedy Scholar. He lives in England.
“Math needs more demystifiers, and Junaid Mubeen is here to lift back the veil to show the inner workings of math and mathematicians. This book importantly shows that computers and AI do not make mathematicians redundant. In fact, Mubeen uses the advances and stumbling blocks in AI to illuminate the crucial contribution that human mathematicians continue to make. I recommend this to anyone who thinks—or knows someone who thinks—that AI will make the study of math redundant. AI is powerful, but human thinking is differently powerful, and Junaid Mubeen deftly shows us how.”
— Eugenia Cheng, author of X + Y: A Mathematician's Manifesto for Rethinking Gender

"A compelling and wonderfully readable analysis of why computers won't replace mathematicians, but why the two together are superior to either on its own. A rallying-cry for real intelligence in the age of algorithms and artificial intelligence."
— Ian Stewart, renowned mathematician and author of What’s the Use