The Last Queen: Elizabeth II's Seventy Year Battle to Save the House of Windsor: The Platinum Jubilee Edition (Paperback) 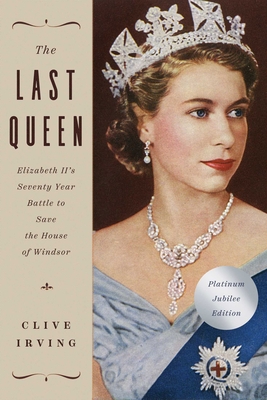 The Last Queen: Elizabeth II's Seventy Year Battle to Save the House of Windsor: The Platinum Jubilee Edition (Paperback)


Not On Our Shelves—Ships in 1-5 Days
A timely and revelatory new biography of Queen Elizabeth (and her family) exploring how the Windsors have evolved and thrived, as the modern world has changed around them.

Clive Irving’s stunning new narrative biography The Last Queen probes the question of the British monarchy’s longevity.  In 2021, the Queen Elizabeth II finally appears to be at ease in the modern world, helped by the new generation of Windsors. But through Irving’s unique insight there emerges a more fragile institution, whose extraordinarily dutiful matriarch has managed to persevere with dignity, yet in doing so made a Faustian pact with the media.

The Last Queen is not a conventional biography—and the book is therefore not limited by the traditions of that genre. Instead, it follows Elizabeth and her family’s struggle to survive in the face of unprecedented changes in our attitudes towards the royal family, with the critical eye of an investigative reporter who is present and involved on a highly personal level.
Clive Irving has had a long and career in journalism on both sides of the Atlantic. He has been managing editor of the Sunday Times in London, he was director of current affairs programming for London Weekend Television; and a consulting editor for Newsday in New York. He was a founding editor of Conde Nast Traveler, where he is still Editor Emeritus, and is a regular columnist for the Daily Beast. Most recently, he was a key contributor to the acclaimed two-part BBC documentary, Margaret: The Rebel Princess, which was broadcast on PBS in America. Irving lives in Sag Harbor, New York.
"Over the course of her lifetime, monarchy became increasingly rare and outdated, and the British Empire dissolved. To Irving, telling the story of the queen’s life means trying to figure out how she was able to ensure the monarchy’s survival despite decades of societal upheaval."
— Vanity Fair

"Before William and Kate or Harry and Meghan—and even before anyone had heard of a 19-year-old named Diana Spencer—there was Clive Irving.  Irving’s long career as a journalist covering the royal family includes serving as managing editor of The Sunday Times in London, consulting editor of Newsday in New York City, and as the founding editor of Conde Nast Traveler.  His new book [The Last Queen] is a jaw-dropping biography of the Queen."
— Glamour

“[An] irresistible history of the Windsor family. From the scandals they tried to hide (Nazi leanings) to the Queen’s perceived chilliness, particularly in mourning Diana, to the Harry and Meghan problem, Irving illuminates an antiquated system in the flux of change.”
— People

"In each incredibly readable chapter, Irving reexamines all the famous crises of Elizabeth’s reign, from the various scandals of Princess Margaret to the popularly sanctified figure of Diana Spencer."
— The Christian Science Monitor

"Irving puts his mark on a familiar story with his confident assessments and insider perspective on the British press. Royal watchers will delight in this richly detailed appraisal of the world’s oldest reigning monarch."
— Publishers Weekly

"Irving does an excellent job of providing a respectful and unbiased approach to many aspects of the lives of the queen and her family while also illuminating the knotty relationships among the Windsors, the press, and the public, leaving readers enlightened and in awe over Britain's resilient and gracious monarch."
— Booklist

"A gossipy, yet critical look at the monarchy by a skillful writer who knows his subject well. Fans of The Crown will especially enjoy."
— Library Journal

"Clive Irving’s immensely readable book brings real authority, context, and personal insight to our understanding of Queen Elizabeth. As a newspaperman in the center of the coverage for decades, he has a wonderful eye for the illuminating detail and a sense of history that pulls together the threads of social and political change, never losing sight of the remarkable woman at the center of his enquiring gaze. The Last Queen is as entertaining as it is essential, and I read it with gusto."
— Tina Brown