Between Everything and Nothing: The Journey of Seidu Mohammed and Razak Iyal and the Quest for Asylum (Paperback) 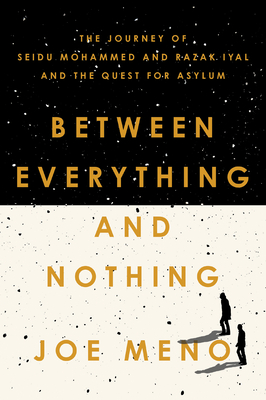 Between Everything and Nothing: The Journey of Seidu Mohammed and Razak Iyal and the Quest for Asylum (Paperback)


Special Order—Subject to Availability
A New York Times Book Review Editor's Choice, this harrowing true story of two young men from Ghana and their quest for asylum highlights not only the unjust political system of their homeland, but the chaos of the United States’ failing immigration system.

Long before their chance meeting at a Minneapolis bus station, Ghanaian asylum seekers Seidu Mohammed and Razak Iyal had already crossed half the world in search of a new home. Seidu, who identifies as bisexual, lived under constant threat of exposure and violence in a country where same–sex acts are illegal. Razak’s life was also threatened after corrupt officials contrived to steal his rightful inheritance.

Forced to flee their homeland, both men embarked on separate odysseys through the dangerous jungles and bureaucracies of South, Central, and North America. Like generations of asylum seekers before, they presented themselves legally at the U.S. border, hoping for sanctuary. Instead they were imprisoned in private detention facilities, released only after their asylum pleas were denied. Fearful of returning to Ghana, Seidu and Razak saw no choice but to attempt one final border crossing. Their journey north to Canada in the harsh, unforgiving winter proved more tragic than anything they had experienced before.

Based on extensive interviews, Joe Meno’s intimate, novelistic account builds upon the international media attention Seidu and Razak’s story has already received, highlighting the harrowing journey of asylum seekers everywhere while adding dimension to one of the greatest humanitarian concerns facing the world.
Joe Meno is a fiction writer and journalist who lives in Chicago. He is the winner of the Nelson Algren Literary Award, a Pushcart Prize, and the Great Lakes Book Award and was a finalist for the Story Prize. The bestselling author of seven novels and two short story collections, including Marvel and a Wonder, The Boy Detective Fails, and Hairstyles of the Damned, he is a professor in the English and creative writing department at Columbia College Chicago. Find out more at joemeno.com.
"Meno, a professor of creative writing and prolific fiction writer, tracks the grueling journeys of his complexly rendered protagonists, Razak and Seidu . . . The author portrays them convincingly as hapless pawns in a massive explosion of migration, countered in the Americas with greed and cruelty . . . The narrative is dispiriting, as Meno documents the Kafkaesque, for-profit reality of today's immigration morass, but Meno writes deftly, with a fine sense of detail and place, bringing an all-too-common story to life. A well-paced and engaging account, highly relevant to current political debates." --Kirkus Reviews (starred review)

"A suspenseful account of two Ghanaian refugees' quest for political asylum . . . Meno's well-written story of survival and friendship puts individual faces on the plight of millions of refugees around the world. Readers will be equal parts outraged and inspired by this novelistic account." --Publishers Weekly

"The most important book I've read in a long time, Between Everything and Nothing vividly dramatizes what the world needs to know about the tragic effects of our corrupt and dehumanizing immigration system. Though harrowing, the story of Seidu Mohammed and Razak Iyal is also deeply inspiring, revealing how two powerless but fiercely courageous asylum seekers, battered by years of injustice and cruelty, held fast to their religious faith, their dignity, and their love and hope for humanity." --Sigrid Nunez, author of The Friend